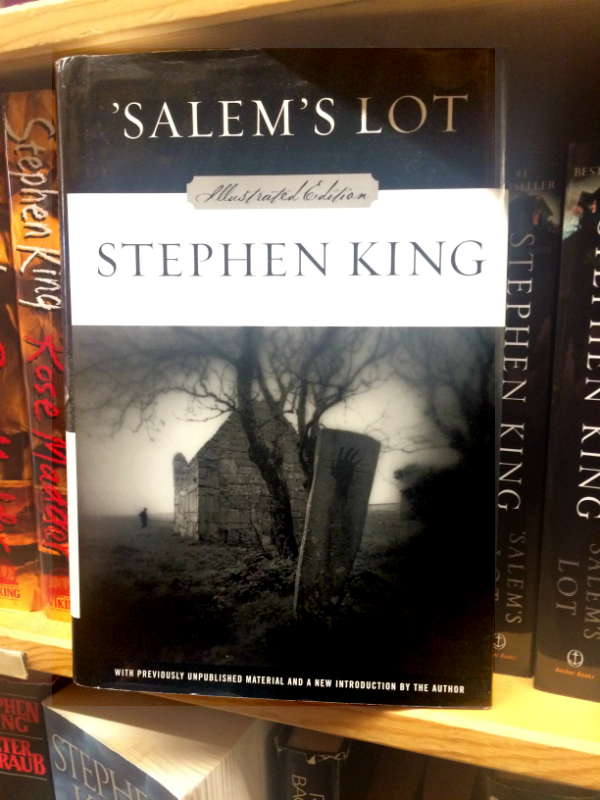 Going into reading ‘Salem’s Lot after finishing Carrie, I was expecting to be scared. Parts of Carrie were creepy and I thought since this was King’s second novel that he would build upon it to actually scare me. It was about vampires, but not the kind that seduce or sparkle. There is nothing charming about them. They are the old-school, spooky kind of vampires. I had high hopes when starting this book. I felt a little let down by it, but when I think back on it, I believe I had the wrong expectations going into it. If I knew nothing about Stephen King and picked up this random book to read, I would have not had many disappointments about it. I believe I was too hung up on wanting to be scared by reading about vampires, when there is so much more going on with this story than that.

It focuses mostly on Ben Mears, an author, who used to live in the small town of ‘Salem’s Lot, and has come back to it to write a new book about it and a house there that has haunted him since his youth. Ben meets a young woman named Susan Norton and starts a relationship with her. While those two get to know each other, the reader is introduced to the rest of the small town, which I actually enjoyed. King did a great job of character building during the first part of the novel with couples having affairs, people being unhappy with their lives, random gossiping, and families dealing with the disappearance of a small boy. The boy disappears around the same time that Ben Mears shows up in town and also when two strangers from Europe show up to purchase the Marsten house (a spooky mansion on the outskirts of town overlooking it) and set up an antiques shop in town. The boy’s disappearance is what sets the overall plot into motion.

I could tell the book was written in the 1970s from the parts about the townsfolk. There were a couple of instances where women were beaten up by their men and no one thought there was anything wrong with it. It stuck out to me since I am not used to reading something like that in modern literature, but I did not get the feeling that King thought it was something okay to do. He did not shine a favorable light on many people in the small town. It was one more unsavory characteristic that a few people had.

While I did like learning about this town and all its inhabitants, I had wanted to be scared by this vampire moving into town and slowly taking it over. I did not find that scary enough for me. It was a bit creepy, and I thought the creepiest parts were anything taking place in the Marsten House. I wished more time had been spent there. There were even hints that the house itself was evil incarnate, but it was only mentioned a few times and not really investigated. I think I would have enjoyed it more if it focused on the house more than it did.

I also was confused by how much religion played into fighting off vampires. There is even talk in the book about how the creature is older than any modern day religion, which would make me think that crosses and holy water would not work against it. There were many characters in the book that were not religious, but using these tools to fight the creatures. I think I have read too much modern-day vampire stories to understand why those items would work when hardly anyone seems to believe in them, including the creatures.

The ending of the book fell apart for me a bit. After spending all that time building up so many different characters in town, most of them were not mentioned again. You could guess what happened so them, but if we spent time getting to know them, why not mention them again? It felt like King went into this story to write about a vampire, but then was compelled to write about a small town instead. After setting up that town, he realized he needed to wrap up the vampire story to give it an ending, but the two different parts didn’t relate all that much. I think that was my frustration with it. I was happy to go along with the change of direction in the book when it moved away from being a vampire story, however, when it veered back towards it again, it was exciting and action-packed, but left a lot of loose threads.