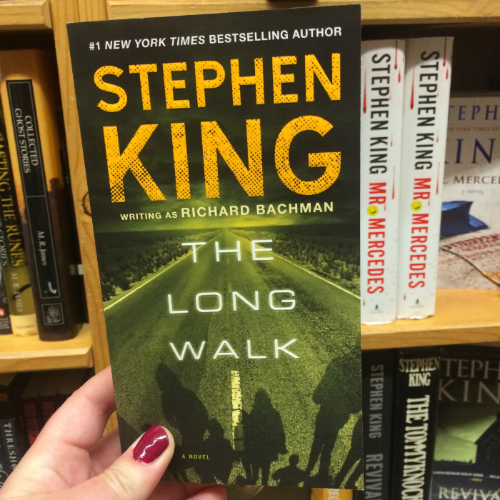 After reading four Bachman stories (Rage, The Running Man, Roadwork), this one is my favorite. It is so dreary with no hope, and yet, I really enjoyed it.

Any game looks straight if everyone is being cheated at once.

I could see the beginnings of the plot to The Running Man in this story where it is a dystopian future where, for reasons unknown, young men compete in a contest to win anything they could ever want for the rest of their lives while people cheer them on and place bets on who will win or die.
The long walk consists of 100 young men walking from the border of Canada in Maine for as long as they can without stopping or going below four miles per hour. If they stop or slow down four times, they are shot dead. The walk lasts as long as it takes for one walker to remain and win. There are no breaks for sleeping or eating.
Even with that background, this story was similar to “The Body” where it is a few boys walking towards a destination and talking. Stephen King does that well. The main character does not want to get to know the other boys too well since he knows that if he thinks of them as friends, it is going to be even harder to want to win since everyone will have to die except him. He does end up talking to a few boys and they bond while walking, talking about their lives and why they chose to participate in the walk.
There isn’t much more to this story, but I really did enjoy it. It is so dark and the ending is bleak, but it was really interesting the entire time.