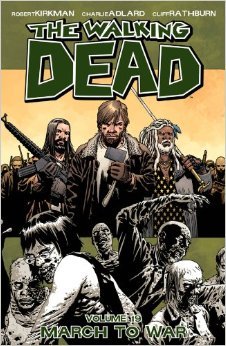 Most of this volume was getting plans in place for war, hence the title of the volume. I knew something major was going to happen in the next volume, but I didn’t expect the craziness at the very end of this one. Once again, Rick does something rash yet no one blames him for it. Carl tries to do something good, but messes up. Everyone is in harm’s way because of Rick and/or Carl.

I find myself rooting for everyone on Rick’s side to win while also being very annoyed by Rick. I really want Jesus and Michonne to be in charge. He can fly through the air and kick all the bad guys in the head while she slices and dices with her machete.

Even with the poor choices, I can’t wait to read about the actual war and see who makes it out alive.