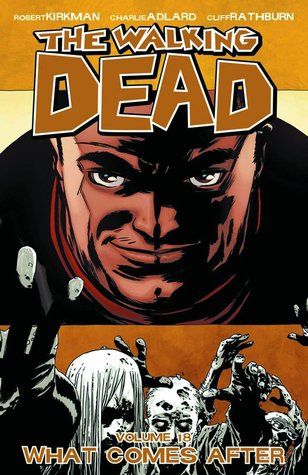 The Walking Dead, Vol. 18: What Comes After

Carl, Carl, Carl. This kid can’t stay put. It seems every volume he has gone missing because he loves to jump into vehicles leaving Alexandria and putting himself in harm’s way, which causes Rick to put everyone in harm’s way just to save his dumb kid. Still, through all of this, I like the comic book version of Carl better than the one in the show. Maybe I just don’t like the actor.

This volume was all about introductions. We got to see Negan in his every day life through the eyes, er eye, of Carl and we are introduced to Ezekiel. Negan might try to put forth the image that he is a reasonable guy, but seeing the rules he has the Saviors follows doesn’t really follow that. He has his own particular rules that he has decided like a dictator and no one can question if they are good or bad, or if they should ever change. And the whole multiple wives thing is icky. I am not a fan of Negan.

I feel like I’m pretty close to caught up to the television show, so even though some parts I might know, mostly going forward is going to be a surprise to me and since so much war is in the upcoming titles, I’ll see who makes it out the other side.

Tags:robert kirkman, The Walking Dead Vol. 18: What Comes After