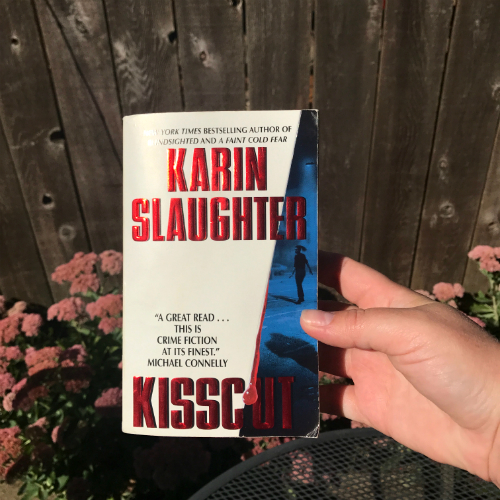 I found the first Grant County book (Karin Slaughter’s debut, Blindsighted) decent, but I could tell that her storytelling improved by already reading some of her later works. It felt like a good first novel and wondered how long until her writing was where I had seen it later on in her career. This second novel, Kisscut is a huge leap in quality. Sometimes when reading a book that switches viewpoints with each chapter, I get sad when I’m leaving one character or not too thrilled to spend time with a certain character. I never felt that way while reading Kisscut. Each character is interesting and the story constantly moved along that I never felt like I was wasting time with one character.

I remember when writing my review of Pretty Girls and giving the warning that it was graphic, but it has nothing on the case in Kisscut. Not only is it graphic, the level of evilness that takes place is sad, revolting, maddening, and sickening. While reading it, I wondered why I read books like this, but it was all very compelling. I don’t want to give too much away, but if you have any problems with harm coming to children, then you might want to skip this one.

If you do skip it, you will also miss the developing stories from the main characters in the first book. Dr. Sara Linton seems to have recovered from the case in the first book and is trying to decide if she should get serious with her ex-husband again. Chief Jeffrey Tolliver feels immediate guilt over a decision he has to make at the very beginning of the book and the anger he feels towards many suspects he comes across during the case. Det. Lena Adams is not dealing at all with what happened on the case in the first book. She is really struggling with what happened to both her and her sister.

I liked Sara Linton right away in the first book and wasn’t too sure about Jeffrey, but he won me over in this book. Lena wasn’t my favorite character in the first book, but did feel bad for what happened to her. I really felt for her in this book, even when she was lashing out at everyone due to not dealing with her trauma. She drove me crazy, but her character was still very interesting.

You really can’t read this book without reading the first one. I don’t know if the rest of the series builds upon each previous case or if they start to separate, but I do like the serialized nature of the series so far.