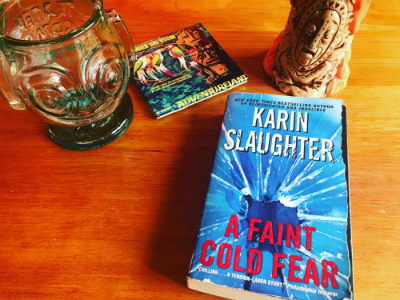 In the previous two books in this series, there was a good balance between the cases and the relationships of the main characters in Grant County — Dr. Sara Linton, Chief Jeffrey Tolliver, and Lena Adams. In A Faint Cold Fear, the cases almost seem secondary to the character study between Jeffrey and Lena.

There are multiple suicides that have taken place on the college campus in town. Dr. Sara Linton isn’t completely convinced that they are suicides, but is having trouble proving it. She’s also dealing with a family member in the hospital that is taking some of her focus away. I would have thought that would have been a bigger part of the story, but it was minor. Most of the book focuses on the relationship between Jeffrey and Lena, which is strained by what happened at the end of the last book.

In the last book, it seemed like Lena was making baby steps towards recovery over the attack she had to deal with in the first book, but she is still traumatized by what happened to her and her twin sister. She has started drinking, which she never did before because her uncle that raised her had many addictions, which she almost hates him for. She hates herself for drinking but wants to numb the pain and fear she still feels. She’s embarrassed by what happened to her and how everyone knows. She feels she left Jeffrey down with how she has dealt with things since the attack, but she’s also stubborn and doesn’t want to let him know how scared she is since she never was before.

Jeffrey grew up with both his parents as alcoholics, so once he suspects Lena is drinking to the point of blacking out, he is livid. Instead of being supportive, he becomes angry at every decision she makes and thinks the absolute worse about Lena during the investigation.

I really liked this book, but it was also a hard one for me to get through because I had to take breaks due to my own anger and frustration at the characters. The bad decisions they were making were completely believable, but I wanted them to just sit down and talk to one another truthfully about how they were feeling. Of course, that wouldn’t have been realistic or interesting to read. Lena makes horrible decisions, all leading back to her not really dealing with what happened to her. Jeffrey makes poor decisions in how he finds some circumstantial evidence and jumps to conclusions instead of waiting for forensic evidence to come through.

It works out in the end for the most part, except there was a twist at the very end that I did not see coming. Oh, these characters! They are going to drive me crazy.