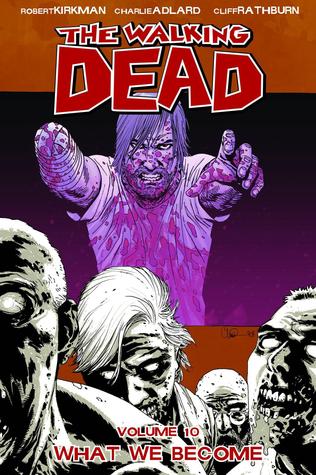 The Walking Dead, Vol 10: What We Become

This volume was intense! The entire side trip Rick and a few others took had me on the edge of my seat.

Rick and Maggie were still dealing with what went down at the prison, but Rick seems to be back to his old self. He isn’t making me as mad as he was before. I agreed with most of his decisions, even if Dale didn’t. Dale is annoying me now, especially when he blames anything bad that happens on Rick. He didn’t start the zombie apocalypse.

In the television show, I always loved the character of Morgan, even when he wasn’t right in the head. I credit most of that to the actor because I am not feeling the same when I come across his character in the comic. I was feeling like other in the group do about him and I’m wary of him.

I am still not used to the twins being around. They surprise me whenever they show up. That scene with the cat was….eek! They have really been affected by all that’s happened.