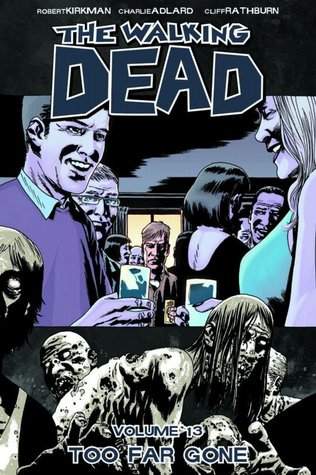 Everyone but Rick seems to trust the people of Alexandria. Rick is asked to be the constable and it seems the power goes right to his head, which is odd since it seemed like he was a level-headed cop before the zombies came. When he thinks someone might be abusive, he doesn’t do much before he decides his suspicions are confirmed and punches the guy. That leads to some chaos.

I thought both Douglas and the community would be more pissed at Rick by how he handled the volatile situation, but everyone seemed fine with it. That’s not very realistic. Rick has been through some shit, but so has everyone else. That doesn’t make him a good leader though. I did like Michonne yelling at hime. It was unexpected, but mimicked my own feelings towards Rick.

The end of the volume with the idiots trying to threaten their way into the city was interesting. It also seems like this entire volume has been more a set up for what’s to come next.