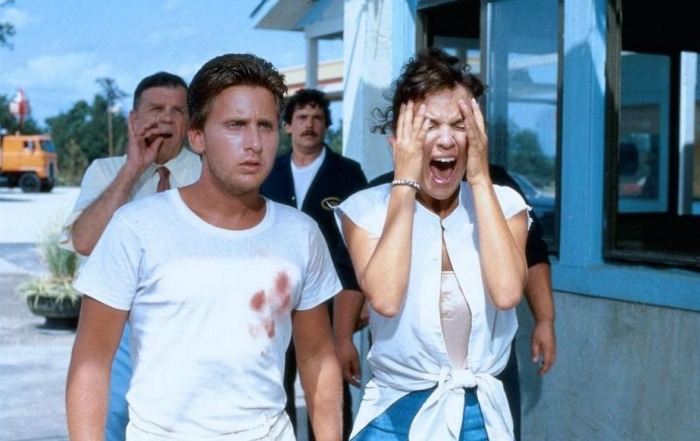 Based on the short story “Trucks,” which is not one of my favorite stories in the Night Shift collection, Maximum Overdrive has the makings of a very entertaining B-movie, but while it starts out as interesting, it becomes boring quickly. Stephen King is fascinated by inanimate objects coming to life. I’m good with that. In the book it focuses only on motor vehicles, while in the movie it is any kind of machine that has decided it is sick of humans and needs to destroy them. Even though King directed this one himself, it does not improve anything. Others have done a better job in bringing his stories to life. He’s really good at writing. It’s okay if he sucks at directing.

The movie begins with an awesome cameo by King where an ATM calls him an asshole and AC/DC starts blaring (the entire soundtrack is AC/DC). Soon after, bridges start malfunctioning by raising while cars are on them, vending machines start shooting out cans like missiles and hitting innocent video game players (including Giancarlo Espositio aka Gus Fring), and self-propelled lawnmowers with a taste for blood go after a young boy riding his bike through a neighborhood (a much more accurate representation of “The Lawnmower Man” story than that stupid 1992 movie that only shared the name with the short story). The movie then focuses on a truck stop diner where a few big rigs are parked and start threatening all the diners inside by running over anyone that leaves.

When the focus shifts to the people stuck in the diner, it lacks tension and the bad acting doesn’t help. It is a bit repetitive until the group figures out a plan to defeat the trucks or at least distract them long enough to get away. At this point, I really didn’t care what happened to anyone in the movie.