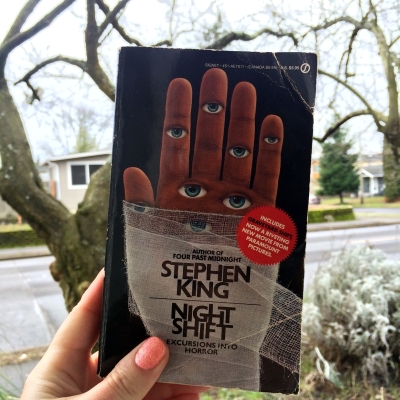 The ladder had always held us before, we thought it would always hold us again, which is a philosophy that gets men and nations in trouble time after time.

The first time I read Night Shift, I was in high school. From the few stories that I had read by King at the time, I really enjoyed his short story collections the best. I think I was fascinated by all the scenarios he came up with and didn’t mind if the story itself didn’t come to a real conclusion since life usually continues on after a story ends without a tidy resolution wrapping up all the loose ends. Reading it this time though, there were a few stories that I still really liked, but overall, the entire collection felt mostly like halfway finished story ideas.

I am glad that this time I am reading King’s works in order because in this collection of twenty stories, he either references previous works or there is an inkling of bigger story ideas to come. It starts out with “Jerusalem’s Lot”, which takes place about 100 years before the events in ‘Salem’s Lot, but the main character in the story is living in the house that would become the evil Marsten house in that book. While somewhat interesting, it wasn’t my favorite story. I feel like I was more amused by the story at the end of the collection called “One for the Road” that takes place well after the events in ‘Salem’s Lot. It is a nice way to bookend the story collection.

In both “Night Surf” and “Children of the Corn” he is writing self-contained stories that have references to The Stand. In “Night Surf”, some teenagers are partying because they don’t know if or when they will get the flu that is wiping out most of America. I thought there wasn’t really anything to that story until I started listening to The Stand and then I realized where that idea started. There is a brief reference to He Who Walks Behind the Rows in “Children of the Corn” that also seems to be referenced in The Stand.

Beyond making references to other works, there are some other themes that are running through this story collection. King seems to be a big fan of inanimate objects coming to life or being possessed. There is an industrial fold-and-press laundry machine in “The Mangler,” little green army men in “Battleground,” all sorts of vehicles in “Trucks,” and the lawn mower in “The Lawnmower Man” that all come to life in some form. None of those were my favorite of the stories. I believe I liked them more the first time reading them. Another story that I remembered liking quite a bit was “Gray Matter” about a guy that gets some kind of bacterial infection from a bad case of beer and slowly turns into a gray blob. It scared me so much the first time I read it. This time, I only found it gross.

The stories I did like were not the straight out horror ones. They had more going on than demonic possession of an object. “I Am the Doorway” (which is the story explaining the eyes on the hands on the book cover) verges on science fiction, but I wished the story had been longer. I wanted to know more about what was happening to the guy that had these eyes growing on his body. “Quitters, Inc.” was about company that uses an interesting aversion technique to get its clients to stop smoking. It is so twisted that I loved it. Even though it was mostly horror and dealt with something that is most likely pure evil, I did enjoy “Children of the Corn.”

My favorite story though was “The Last Rung on the Ladder” which was not a horror story but more of a tragic true-to-life story. It really resonated with me more than some of the traditional horror stories. Those were fun to read, but I kept thinking back to this guy telling the story about what happened to him and his sister when they were younger, playing in the barn when they shouldn’t have been.  I wished there had been more stories like that and if I remember correctly, I believe King’s later story collections go more that route.