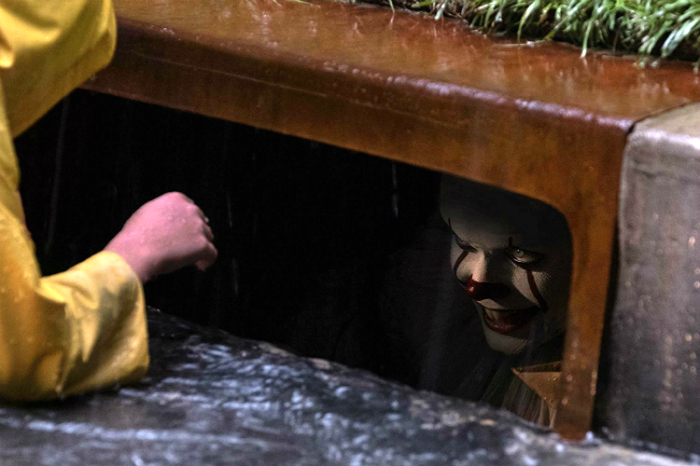 I haven’t reached It on my Stephen King reading list yet and I never read it previously. I also missed the Tim Curry miniseries from years ago. I really didn’t know much about the story going in besides there is a clown named Pennywise terrorizing children. Originally, I was going to hold off on watching this movie until later, but decided that it looked too good to pass up now. I’m glad I did. It did have some issues, but overall, I found it to be enjoyable movie.

A group of kids that call themselves The Losers because they are picked on by other kids and their own parents are starting their summer vacation in Derry, Maine, a town that they don’t realize has a higher rate of missing people, especially children, than other towns. A new kid in town fills them in on this fact because it takes place in the 1980s without the internet to fill them in on the outside world. Kids start disappearing, nightmares involving their fears increase, and the The Losers decide they need to do something to make it stop.

I really liked all the child actors and appreciated the time getting to know them as a group. I wished we could have gotten to know some of them a little more individually. Knowing Stephen King, it has to be there in the book, but in the movie, we ended up with smart-ass kid, hypochondriac kid, home-school kid, and Jewish kid. They didn’t really get to have more personality than that. We did get to know Bill, Ben, and Beverly, but not really the other ones so much.

On a similar note to having the characters a bit more fleshed out, I wished more time could have been spent on their fears. I wanted most of the movie to be about their fears, where did they stem from, and how was It bringing them to life. Some of the fears were only talked about instead of shown, while others were so brief that no tension was able to be built before the scene was over.

I found Pennywise to be creepy as hell until he talked. I think I wanted his voice to be deeper than it was, but it threw me off, so I liked it better when he wasn’t talking. There were a few moments that I actually jumped, but the movie wasn’t as scary as I wanted it to be. Maybe because some of the fears were taking place in the day time. The creepier moments took place inside a room, basement, or some other darker area. That being said, one of the moments that creeped me out the most was when Ben was in the library looking at the book on Derry history. In the background, out of focus, an old lady is looking right at him every time the camera shows his face. Later on, when he gets up to chase a balloon that has floated through the room (from the direction of creepy old lady), she’s back to looking at books on the shelf. I was waiting for her to come up to him and that tension is what I wanted constantly through the movie.

This was a long movie, so I am wondering if anything was cut for time, but then there was a random montage scene with the kids cleaning up a bathroom. While I really enjoyed The Cure song that played while this took place, it did not fit the mood of the movie and didn’t really add anything to it. The important scene between Bill and Beverly that Ben watched, takes place after the bathroom is cleaned. It could have jumped straight to that point.

It ends by saying it is chapter one. I understand the book also follows the kids after they grow up so that is what the sequel will be covering. I am hoping there is more atmospheric spookiness in that sequel. I did like it overall, but I wanted more scares.