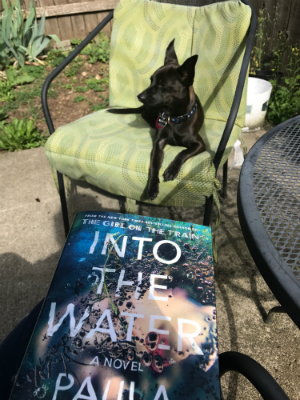 Beckford is not a suicide spot. Beckford is a place to get rid of troublesome women.

While I did not find Into the Water to be as compelling as The Girl on the Train, there were enough secrets in this small town to keep me reading. Many women had committed suicide in a river that went through the town, but not everyone believes they were all suicides, but a way to get rid of troublesome women. Jules, who ran away from this town and her own scars of childhood, has to return because her sister is the latest drowning victim. Jules doesn’t believe that her sister, Nel, would do this to herself, especially since Nel loved the river and all the stories surrounding it.

The first part of this book was difficult for me. Each chapter was from a different character’s perspective, but each chapter was a bit too short. I didn’t spend enough time with one character before moving onto another one so I spent a lot of time flipping back pages and rereading parts that I remembered, but didn’t remember what character that part of the story went with. It was a struggle.

Once I moved into the second part of the book though, I had all the characters straight and it went more smoothly. I did enjoy the relationship between Jules, Nel, and Nel’s daughter, Lena. It was very complicated and I liked Jules working through her issues throughout the book. Hawkins’ also did a good job getting into the mind of some of the men and how they either blamed women for their problems or took no responsibility themselves. She really stated their case, but it never put them in the best light. There were clues about what actually happened to the various women so the ending wasn’t a complete surprise. It felt deserved.