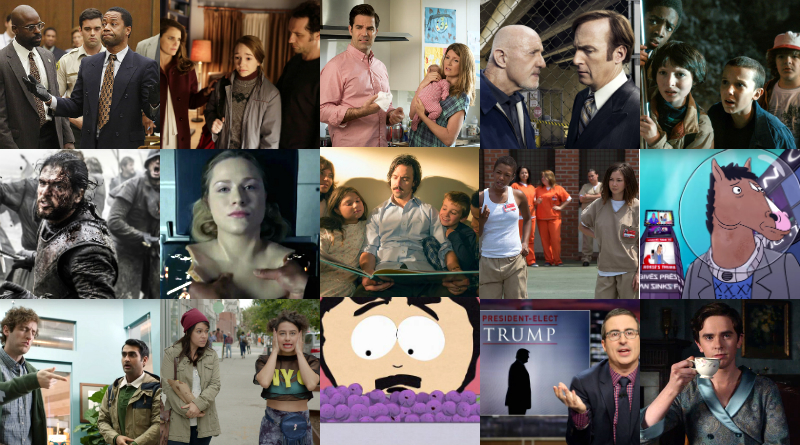 I was going to do a top 10 but I ended up with 15 shows. My basis for picking these shows were that we couldn’t wait for another new episode to air each week or we binge-watched all the episodes at once, which is the equivalent of not being able to wait each week for another new episode. There are some shows that didn’t make the list because I haven’t gotten around to watching them yet, even though I have heard they are good (Atlanta, Horace and Pete, The Crown). There are also some other shows that I find entertaining and enjoy, but not as much as these shows (Outlander, The Walking Dead, Elementary).

For each show, I also included some of my favorite moments or scenes from each show.

This should not have been so riveting. I was in college when O.J. Simpsons was arrested for the murders of Nicole Brown Simpson and Ron Goldman. I remember the Bronco chase, I remember the trial, and I remember walking across campus and hearing people shout out the verdict in the case. I knew what happened, but this show had me on the edge of my seat. Most of it had to do with the casting with incredible performances by Sarah Paulson as Marcia Clark, Courtney B. Vance as Johnnie Cochran, and Sterling K. Brown as Christopher Darden. John Travolta was weird as Robert Shapiro but then Shapiro was a weird dude, so I accepted that casting. David Schwimmer was the saddest version of Ross when he played Robert Kardashian. The only casting I did not agree with was Cuba Gooding Jr. as O.J. It was not a good fit and I wished they had someone else play him.

Where to Watch: FXNOW | Amazon | iTunes

This series gets better and better. In its fourth season, the two married Russian spies (Keri Russell and Matthew Rhys, both fantastic) have to deal with their teenage daughter finding out the truth about them. They are also struggling with being spies for so many years and coming to terms with losing human assets and agents in the process. We have watched Philip build a relationship with Martha since the first season that comes to head in this one. Elizabeth starts a friendship with one woman to gather intel from her husband, but genuinely likes her friendship with this woman that she knows she will have to disappoint when her mission is done. It gets more complicated and more tense. The show has been renewed for a fifth and sixth season with the creators ending it after the sixth so it should only get better as we get to the big wrapup.

We found the first season of this show shortly before the second season aired so we didn’t have to wait long to watch all 12 episodes (each season is only six episodes long). It was created and written by the two leads, Sharon Horgan and Rob Delaney. He’s an American in London on business when he hooks up with woman for a wild weekend of sex. When he returns back to the States, he finds out she’s pregnant and decides to make a go at the relationship. For its ridiculous premise, this show is so realistic. They act like a real couple and their fights are so genuine. Even if the plots sound like they could be from a sit-com, it plays so real and so very funny. It also has the added bonus of Carrie Fisher playing Rob’s mother in a few episodes along with her French Bulldog.

Where to Watch:  Amazon (Seasons 1-2 free with Prime)

Better Call Saul was supposed to be goofy just like Saul, but it has turned into so much more especially at the end of the first season and continuing on through the second season. I was conflicted rooting for Jimmy to stay good and also wanting him to also become Saul. I don’t want him to become Saul too quickly though because then the show will have caught up with Breaking Bad and that means this show is over. I love that we get to see more Mike Ehrmantraut. This is almost the Mike/Jimmy show since their storylines don’t always intersect, even though I love it when they do since Bob Odenkirk and Jonathan Banks play off each other really well. Then there is Michael McKean as Jimmy’s brother, Chuck. I go from feeling bad for him with his condition and emotional issues to hating him for being so petty and such a dickhead to his brother. He screws him over again and again. Jimmy isn’t perfect either, but does take care of his brother. It’s complicated which is what makes this all so great to watch.

I’m not sure who didn’t watch this show this past year. Everyone was talking about it. It was a fun throwback to Stephen Spielberg movies, Stephen King books, totally awesome theme music, and other 1980s pop culture that actually felt like it was from that time. The kid actors were all fabulous and it was fun seeing Winona Ryder again. The standout for me was the girl who played Eleven. She was so good. I can’t wait for the second season.

OnThe Walking Dead, they think they are creating a cliffhanger about whose head Neegan is going to bash in, but they need to see the correct way to do a cliffhanger from Game of Thrones. While everyone was annoyed with The Walking Dead for taking people up to the point of a beating and then not showing anything until the next season, Game of Thrones actually killed someone at the end of the fifth season and had everyone all year asking, “Is Jon Snow really dead??” That’s what you want people talking about. The sixth season gave us the answer about Jon Snow, an excellent and claustrophobic battle of the bastards, Sansa was able to show she has learned a thing or two about politics in the past few years, Bran learned a very important secret, and Arya got some sweet, sweet revenge. Beyond the Starks, Cersei cleaned house in King’s Landing in the most spectacular way but also ended up fulfilling the prophecy she was warned about as a teenager. It’s hard out there for a cold-hearted bitch. We also got to see Daenerys show us again why she is a leader when she escaped the Dothraki and gathered her dragons to start heading towards Westeros. And finally, nothing made me sadder than learning the story behind Hodor.

I love robots-taking-over-the-world stories. I can’t get enough of them so, of course, I was going to be drawn to Westworld about a bunch of artificial intelligent hosts that are really hard to tell apart from real people in a western-themed amusement park. I was rooting for the hosts immediately since that’s what I do in all these stories. I knew right away I would like Evan Rachel Wood’s character, Dolores, but I also really was rooting for Maeve played by Thandie Newton. It was like they were not only fighting for their own rights to live how they wanted to live as robots but also as women since they were put through some degrading stuff in the amusement park. This show was a mind-twisting where I would try to guess what would happen and was only correct part of the time. I also really enjoyed when they would play modern songs on the piano in the park and tried to guess them. I only wished it wasn’t so much Radiohead.

This is my only network show on this list. It is a good show to fill the gap left by Parenthood. The first few episodes were really tough to get through without shedding a tear. I have been able to keep it together for the last few, but it is still heartwarming for the most part. I do not agree with the mother’s decision to not tell her adopted son about his father for all those years. The cast is really good and I like that the flashbacks are integral to the show and not a minor part of it.

9. Orange is the New Black (Netflix)

This show was intense this past season. It goes in deep into the problems with privatizing prisons from food that isn’t really food to not providing proper guard training to hiring prison guards on power trips. There were some funny moments, but each episode ratcheted up the tension until the heartbreaking season finale.

Bojack works on trying to get an Oscar because he thinks it will make him happy, but of course it won’t. This show is so good, but also on the depressing side. It still should be watched. And it is also filled with tons of silly moments, like the Bonesmobile!

This still appears to be one of the most accurate reflections of the world of start-ups. We also had to watch the following coughing bong scene so many times because it was the best.

These two ladies are ridiculous and hilarious. Did they grow this past season? Not really, but still awesome to watch.

Where to Watch: Hulu | Amazon | iTunes

I have learned many things from watching Last Week Tonight like the show about retirement funds. It has also been good to watch through the horrible election season. I can imagine next season is going to be even better because he won’t even have to look at the rest of the world to bring us fucked-up news.

Where to Watch: HBOGO | Amazon (free with HBO on Amazon)

This show has always been a little on the silly side, but as it gets closer to catching up to the movie Psycho, it has gotten creepier and creepier. There are side stories that will make you roll your eyes, but when it focuses on the relationship between Norman Bates and his mother, Norma, it is at its best. It reaches the height of inappropriateness this season.

Where to Watch: Netflix | Amazon | iTunes