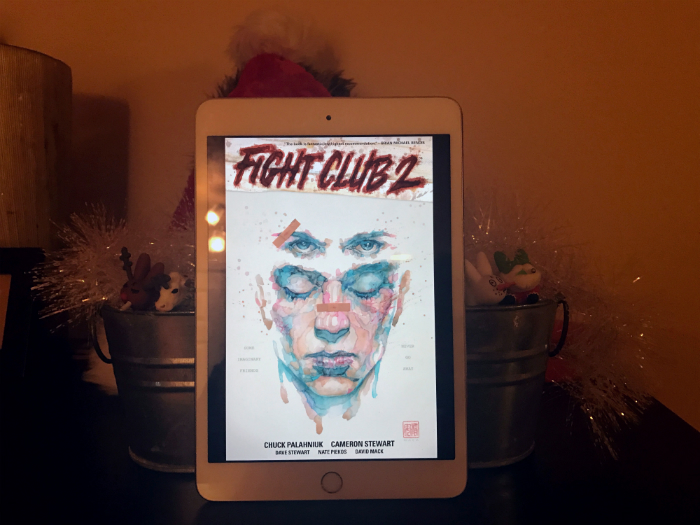 I loved Fight Club, both the book and the movie. While I had no desire for a sequel, when I heard it would be a graphic novel, I was interested. I am unclear why this was made though since it retreads all the same storylines from the original yet lacks any of the wit and humor.

The first book was a really biting satire of consumerism and emasculation. It was also really funny. If you haven’t read Fight Club, but have seen the movie, the humor translate well. There are even funnier lines in the book. There wasn’t anything funny about this though and no new thought-provoking ideas. It was same story as before.

I should state that it seems to be telling the same story as the first one, but only in the most vague ways. There isn’t much of a plot. It seems like it would be summed up in a very short story from what I could tell what was going on. It was hard to tell at times since the artwork was literally covering up the dialogue. There were rose petals or pills floating down some of the panels covering half of what someone was saying. How are you supposed to follow along when you can’t read it? I tried to take it as it wasn’t necessary but there wasn’t much else of a plot going on so it really needed all the help it could get.

Characters from the first one come back, but they don’t add anything to the story or even if they have the same name, they act like a completely different character from the original so why even have them come back? Create a new character. It makes no sense.

Chuck Palahniuk even writes himself in as a character. He shows up at one point and makes a meta joke before it goes back to the story. I thought that would be the only time, but the last chapter is pretty much all about him and the fans and how they will react to what they have read. It’s so bizarre.

I loved his earlier books (Fight Club, Invisible Monsters, Survivor, Lullaby, Choke), but had to take a break while reading Haunted and haven’t gone back to it or read anything he has written after that one. Is this his style of writing now? If so, I’m so disappointed.