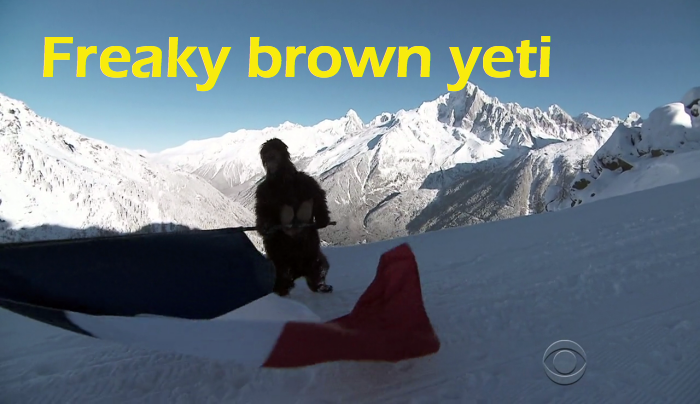 Teams ended the last leg in France and stayed there this leg. The last part of this leg had teams doing a paragliding stunt, but it wasn’t the easiest thing to start. They had to run through deep snow and try to catch the wind or else they would fall. Only a few team members were successful on their first try. We didn’t know what was worse, the running through snow or falling down because their tandem instructors were also falling down with them. I said, “I mean, you don’t just fall. You have someone else fall on top of you.” Amy said, “And not in an interesting sexy times way either.” Continue reading what other non-interesting sexy times took place in this leg in France.

Steve and I were sure the mother/son team was going home since they had been struggling. Amy was convinced it would be a non-elimination leg. We both ended up being wrong, as usual! We are not good at guessing.

As the episode started, all the teams came out to the hotel lobby to bags full of new jackets and pants. Amy said, “What is this now?” I said, “Do they all get free stuff because they are social media influencers?” Then Erin started mugging for the camera with her stuff and I figured that was why. Amy said “I am not really noticing a logo or brand so no idea what I am supposed to gather from this.” I said, “They are hoping that these people will show their stuff off on all their social medias after the show so they don’t even care now.” Amy responded, “I bet the company is sad the models were eliminated right before now.” I said, “The models would say ‘We could model the shit out of these free clothes!'” 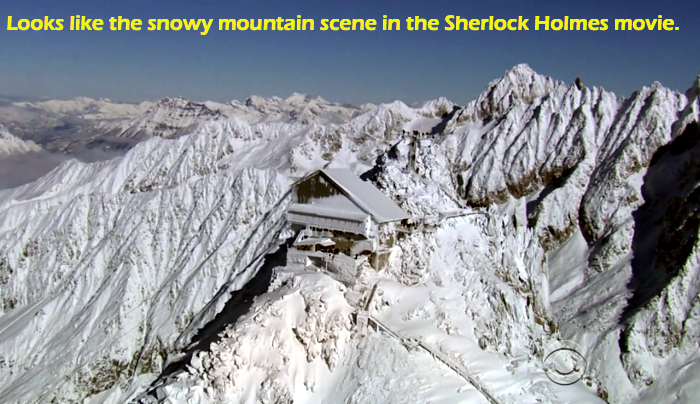 After putting on all their free clothes, team took a gondola up 11,000 feet up in the air into the French Alps. They also had to pick up a mountain guide. When Tyler and Korey arrived, Tyler was thrilled and picked the cutest mountain guide. While riding up in the gondola, Korey and Tyler did their usual banter about “dudes being bros and bros being jocks” and then Tyler said “Oh goodness me” when the gondola shook a bit more than he liked. Steve said, “No dudes or bros have ever said, ‘Oh goodness me.'”

Sheri and Cole got into the gondola and were ready to go up until Zach & Rachel asked them where their mountain guide was, and they realized they didn’t read all of the clue and had to go back and get one.  Zach & Rachel ended up in the gondola with Daddy & Blair. Zach said he was afraid of heights and Blair told him to imagine being up at the top and jumping all the way down, but it being magic instead of real. It made no sense. He looked at her and told her that didn’t help.  I said, “I don’t understand her crazy logic.”

Once teams reached the top of the mountain, one team member had to zip line across a very steep drop to pick up their clue. Ashley did it from the yellow team, but did not secure her clue very well so it dropped when she was almost back so she had to go out there again to get another one.

Zach said he would go get the clue before he realized it was over a drop. He was not pleased, but slowly did it. Daddy decided to do it and cruised across really fast while Steve did his best imitation of Blair yelling “You got it, Daddy!” Amy said, “He’s zip lining across fast to get away from her yelling.”

Sheri did it and cried the entire time. She paused in the middle of it to freak out but I’m not sure why she would stop when she was just dangling in the air. After the task, she said she knew she had to be a big girl and do it. Amy said, “Well, you were pretty much not a big girl, but if that’s what you want to tell  yourself…” 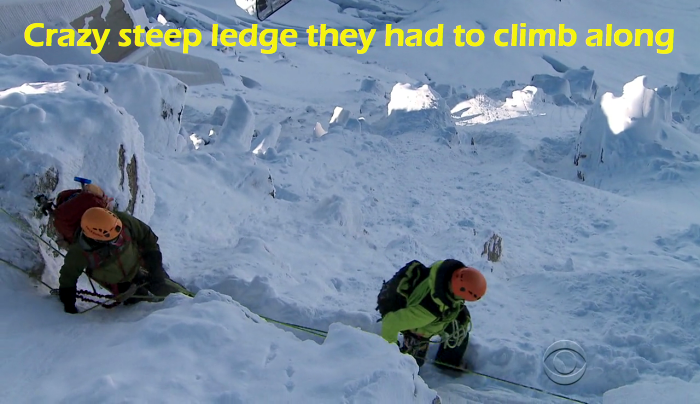 Once teams reached the mountain, they found a detour. All teams except the yellow team picked the one that involved bringing dynamite and lunch (a baguette they were given with their hiking gear) to guys who have jobs to do controlled explosions on the  mountain to prevent avalanches. The area the teams had to walk along to get to the dynamite tossers was really narrow and it seemed like anyone could fall down the mountain at any moment. Team members were attached to each other with a rope so when one person fell, the other person most likely fell into them. It was crazy. I was amazed that mother/son team decided to do this detour, but mom was smart when she said that she worried that building the campsite would take longer. 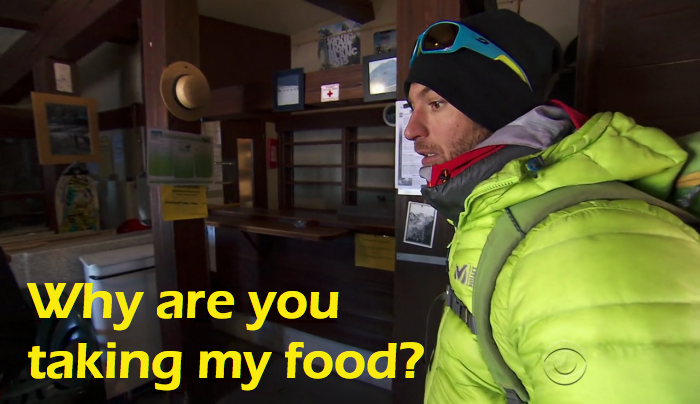 Then, Blair turned diabolical in this race. As Blair & Daddy were picking up the dynamite, he read the clue again and mentioned that they had to bring them lunch. Blair said that the Race considered the baguette as the lunch and they went up the many stairs they had to climb to get to the detour. As they started climbing, Erin & Joselyn showed up and Blair yelled out, “Don’t forget lunch!” and then as she kept climbing, she said to Daddy, “Do you think I should tell them that I’m kidding?” but didn’t stop moving. This caused havoc as Erin & Joselyn ran around looking for a lunch that they were supposed to pick up. They even went inside a building and almost stole one of the hiker guy’s lunch who was looking on like “Why are you stealing my food?!?” Thankfully, they did not steal the guy’s lunch, but it was crazy enough that Steve said “What the hell is going on with the lunch?” since he had missed what Blair had said. We rewound to watch it all again. Then he summed it up, “That girl didn’t mean to be malicious when she said that, but didn’t go back to make sure they knew she was kidding. That’s a dick move!” Amy responded, “As always, do not listen to other teams.”

The other detour had teams make a campsite in the snow including setting up a tent and building a wall of snow around the tent to protect it from the elements. The yellow team was the only one that did this one. They took a risk since they knew no other teams chose it when they decided to do it. They were in third place when they went to start on it, but they did not build their snow wall high enough so it took them quite a while to put it together compared to the dynamite detour. They ended up in seventh place by the time they were done.

Taking Flight or Not Really

After the detour, the teams ran into a road block where one team member had to paraglide down to the other team member while holding a selfie stick and also looking for a clue to tell the person at the bottom. That was all the easy part. The hard part was apparently taking off from the mountain. They had to run fast enough to get enough speed and have the wind catch the sails right. Amy said, “I wonder if they should sled off instead.” She repeated this after frisbee bro who was in first place, biffed it and landed right on his face as they were picking up speed.  That gave Korey a chance to pass the bros since he took off correctly on his first try. He saw the clue, which was a yeti waving a French flag. It was a brown yeti which confused all of us since we thought they were white. Amy said, “That yeti looks like a gorilla so I am not pleased.”

Frisbee bro did take off correctly on his second try. The dancers were the third team to try to it and Matt had no problems taking off. Zach & Rachel were next, but Rachel fell on her face. That gave Blair a chance to pass that team. The last three people to go were Erin, Sheri, and Ashley. They were all waiting for the best wind. Their instructors were the ones to tell them when they thought it was best to go. Ashley’s instructor thought it was good to go, but Erin’s instructor said it was a back wind and that was bad. Then, Ashley fell, so I guess he was right. Amy said, “This is so tense at the end! There is so much stress!” 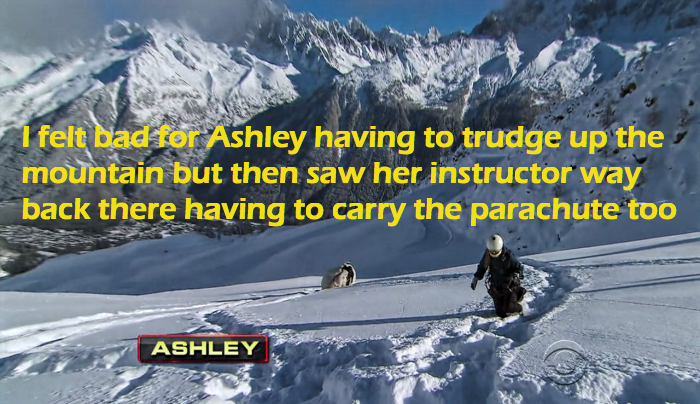 Sheri’s instructor told her to run and they took off! Erin’s instructor told her to start running, but she fell. It wasn’t a wind issue. It looked like she tripped. Amy said, “Derp.” I said, “She barely got anywhere and then fell.” That gave Ashley another chance to go, but the wind died down as soon as she started running so she stopped. Then the camera switched to the teams on the ground who were guessing on who was flying down next. It turned out to be Ashley so that left Erin back on the mountain falling again.  It is unclear how many times she had to try until she finally got it.

Tyler & Korey did get to the pit stop first and won a trip to the Philippines. The frisbee bros were right behind them and werewolf guy was saying that it was fine, but it didn’t sound like he thought it was fine. He must be of the mindset that if you are not first, you are a loser.

The other teams checked into the pit stop in the same order they finished the paragliding task, except for some reason the mom/son checked in right after the yellow team even though Sheri glided down before Ashley. Not sure what happened there.

YouTube girls came in last place and were eliminated. Erin made sure to say she was “blessed” about fifty more times since we won’t get to hear her say it any longer on future episode. It was amusing to hear Steve say “#blessed” every time she said “blessed,” but unfortunately no one else but me got to hear that. I said I would not miss her mugging for the camera.