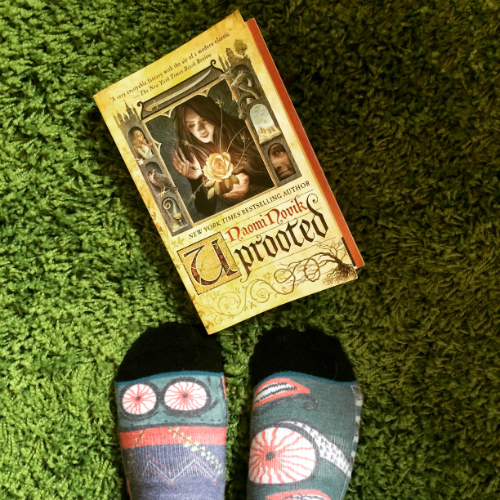 “It comes, I suppose,” I said thoughtfully, speaking to the air, “of spending too much time alone indoors, and forgetting that living things don’t always stay where you put them.”

Uprooted is a young adult fantasy book about a girl that discovers she has magical powers, and while there is a love interest involved, the best part of the story is the female friendship at the core of it.

Agnieskzka lives in a small village where a wizard, called the Dragon, lives in a castle up on the hill and comes down to the village to take one young girl every 10 years. No one knows what happens to the girls while they are there, but after 10 years, these changed girls do not come back to the village, but move on elsewhere in the world. The village puts up with this creepy Dragon because he protects them from a corrupt forest that would continue to encroach and swallow up the village if left unintended. When the story begins, the Wood is snatching up people with tree-like creatures and placing them inside a tree trunk as the corruption fills their minds with horrors. It all sounds terrifying.

Agnieskzka has grown up knowing that she would be of the age that the Dragon was looking for in one of his 10-year cycles, but did not have a great worry about the Dragon choosing her, when her best friend, Kasia was more charming and beautiful. When the Dragon picks the main character instead, it is not much of a surprise.

I really enjoyed this book. It did take me a while to read this book, which is usually a sign of not enjoying it, but every time I picked it up, I was drawn back into it. There was a lot going on in this story, so that might have been it.  I loved Agnieszka, probably because she reminded me of myself with her stubbornness and untidiness. My fascination with the magic included how it worked differently between individual witches and wizards. Some people could get it work by following spells exactly that were in books while others had more of a natural talent and could improvise for slightly different results.

There was a decent villain in the first part of the book, which was really the precursor for fighting the overall evil at the end. He had some horrible behavior in the beginning, but then showed some good intentions, without making you like him any more. It did help explain some of his choices better though.

My favorite part, though, was the friendship between Kasia and Agnieszka. I had unfounded expectations about pettiness between the two of them. At one point in the story, a spell is cast that causes them to see the jealousies that they feel for one another, but it brought them even closer to one another after they worked through their differences. This true friendship was the best relationship in the book.

The one character I was not a fan of was the Dragon. He was a rude asshole, but somehow Agnieszka found that to be charming. Even when he saw she had a good amount of magical power and needed some assistance harnessing it or figuring out how to make it work for her, he was condescending and rude. He sucked as a teacher. She pretty much figured everything out on her own so I saw no need for him.