The 1979 television miniseries of Salem’s Lot does a decent job of translating the spirit and most of the plot points of the Stephen King novel into three hours of spooky vampire shenanigans. Any unintentional laughter I had from it mostly came from the limited special effects due to the time period and a television budget not being as great as a major motion picture effects budget.

It starts out with writer Ben Mears, coming back to a town he lived in as a boy to write about a house that has haunted him since he lived there. He meets Sandy Norton and they start dating. The beginning of the miniseries does a decent job setting up the love story while also introducing some of the more colorful characters in town, including the new guy that opened up an antique shop and now lives in that haunted house.

In the book, it is a slow build with the vampires leisurely taking over the town but the miniseries does not have that luxury. It doesn’t feel forced though. It also does do a decent job with some special effects. I found anyone that had been bitten by a vampire to have exceedingly creepy eyes. It was best if they were sitting or lurching at anyone. That was scary. When any vampire kid wanted to come flying in through a window though, that made me laugh since he was so stiff from the harness they had to use. 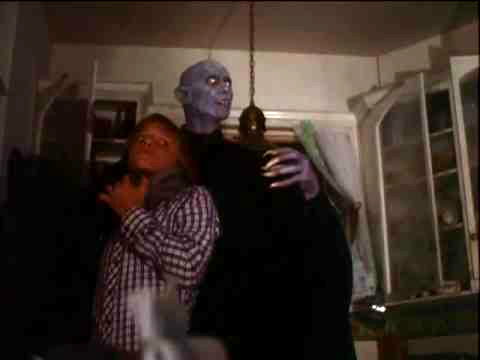 I could have done without the main vampire though. I mean, he is the reason everyone is being turned into vampires, but he doesn’t show himself until the final parts of the movie and I could not stop laughing at him. His rat-like teeth made me giggle and his extended arms and fingers looked like rubber. He was supposed to be scary, but also had a way to charm someone that looked into his eyes. There was nothing scary or charming about him. I only laughed. He was the major downside, but the rest of it was pretty good.