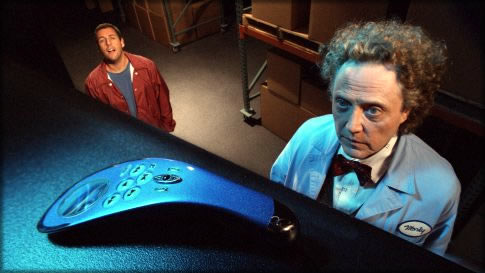 Adam Sandler gets a hold of a universal remote that controls everything in his universe, but it starts going wacky and he can’t control it.

I didn’t go out of my way to see this movie. I didn’t plan on ever watching it unless I stumbled across it. While staying at my parents house in Phoenix when we were there in June for Angela’s graduation, we watched it on the HD channel, just so we could watch something that looked crystal clear. Too bad it was for this sappy movie. I knew it would be sappy though so I was prepared.

Adam Sandler used to be a half way decent looking guy, but as he gets older and rounder, there is no way that someone like Kate Beckinsale would be attracted to him. He always has hot girls drooling over him in movies though. Well, maybe not drooling, but they come around to his goofy charms eventually. Nothing new there, which is true about the plot of the movie. There isn’t really anything new about any Adam Sandler movie. They all involve a plot line where he screws up something by being himself and then eventually fixes it by becoming a better person. I guess that’s a good lesson, but I wish it was as funny as it once was. I still love Billy Madison, but haven’t really enjoyed his movies in quite a while.

There are some amusing scenes with the remote going backwards and forwards. It would learn his patterns of when he wanted to skip something and started doing it automatically. This really screwed up his life and he ended up missing almost all of it. I just kept watching, waiting for it to all be a big dream or something since it continued to get more and more ridiculous. Then I became frightened that the entire movie wasn’t a dream and what was the entire point of the movie? How could this movie be different from any other Sandler movie? At the last moment, my fears were alleviated somewhat and then I couldn’t believe I actually cared a bit.