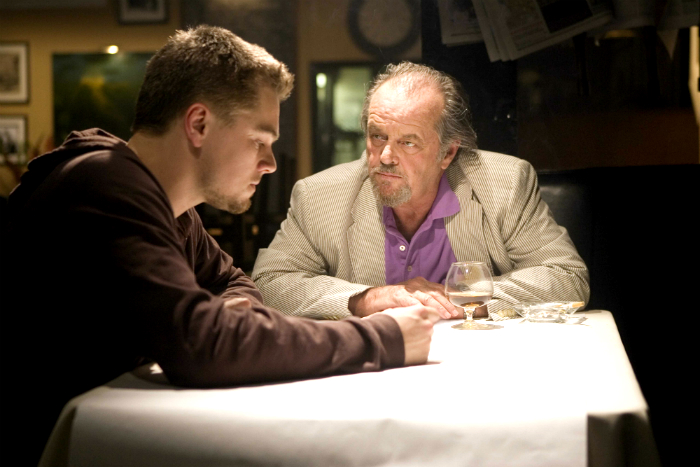 Leonardo DiCaprio is an undercover cop in a mob gang run by Jack Nicholson. Matt Damon is a mole in the police department working for the mob, trying to figure out who is the undercover cop.

This movie is long, but involved. I can’t think of any way for it to be shorter without losing something. There were some quick cuts that can be distracting at times, but then I was thankful they were there to keep the story moving along. I first thought the quick cuts were bad editing, then realized they were there on purpose.

The story starts showing how Leonardo DiCaprio and Matt Damon start off in the police force, but in different areas so they don’t know each other. They have very different paths where Matt Damon’s path leads to detective while DiCaprio’s path leads him to undercover cop. In order to keep undercover cops safe, no one in the police department knows that he is a cop or anything about him. They pretty much erase his identity, or at least hide it until he catches the guy they are trying to catch. The only two people that know about him are those that recruited him: Martin Sheen and Mark Wahlberg. Mark Wahlberg was the only actor in the movie that was nominated for an Oscar for Best Supporting Actor. His character is hilarious, but he wasn’t the best one in the movie.

Both Damon and DiCaprio are impressive. I think I’m more impressed with Matt Damon in each movie I see him in since he loses himself in the characters so well. He is so smooth and slimy when he’s screwing over the police in order to cover and save Jack Nicholson’s mafia character. He is the same smooth and slimy when he’s wooing his one-time therapist who he fires so he can date her. She goes for it, but she can always tell there is something off with him. DiCaprio’s character sees her once as a patient, but then starts to see her as a friend. They have tons of chemistry together and, well, let’s just say that DiCaprio has a really nice body. 🙂

Everyone in the movie has a Boston accent that can be quite thick. No one had a horrible accent though. It was believable, even though I did laugh at how they talked at times.

Going back to the movie’s length, it reminded me of Goodfellas in how we got to see how the main characters get in deeper and deeper (be it deeper in double-crossing or deeper undercover) and it gets messier and messier. After a while, you don’t know how any one can get out of it all cleanly. It isn’t possible. When it gets near the inevitable end, everything goes crazy. I loved the way it ended. I was sad, but it fit the movie so very well.

I’m not a fan of all of Scorcese’s films, but I did always love Goodfellas. I loved this movie like I loved Goodfellas. I liked how it sucks you in and you are engrossed with all of it.