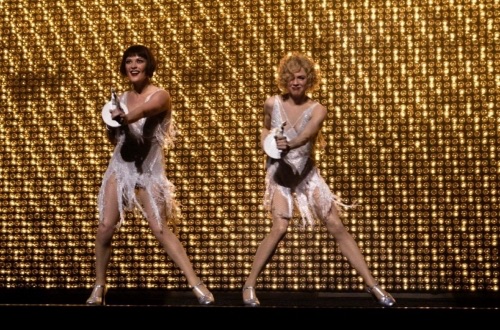 I had seen Chicago in a traveling Broadway show and love it, so I was excited when they started talking about making a movie version of it a few years back. I know it had people attached to it like Madonna and Goldie Hawn. eek! I think they made the right choices with Rene Zellweger and Catherine Zeta-Jones. Everyone sang great and danced wonderfully.

They did an awesome job fitting the songs into the story without people breaking into song and dance in the middle of them talking. It would flash back and forth between someone talking about something and then that person singing and dancing about it at the same time. It really worked well. The songs were great, but I knew that already.

The only thing that confused me was Catherine Zeta-Jones getting an Oscar for it. I thought she was fine, but she wasn’t outstanding. I thought Rene Zellweger did an outstanding job. You forgot it was her when you were watching it. Her eyes weren’t squinty at all! I just know that when I saw the play, I liked the Velma character (Zeta-Jones) more than the Roxie character (Zellweger). In the movie, I liked the Roxie character more, and she isn’t a likeable character. I think that shows what a good job she did. I don’t think she should have received the Oscar over Nicole Kidman because she is awesome, but compared to Zeta-Jones, Zellweger did a much better job.