Covers the covert operation in Somalia in 1993 with Army Rangers and elite Delta Force.

I never had the urge to see this movie when it was out in theaters. A bunch of people at work talked about it before it came out and they couldn’t wait to see it. Then they saw it and talked about how intense it was. Some loved it, others just were worn down by the non-stop action. I still had no interest in it.

Then I found out that both Ewan McGregor and Orlando Bloom were in the movie. I had to see it then. Ewan McGregor does one messed up American accent. It just isn’t right and well, I like his accent, so I’d rather hear that, but I guess it wouldn’t make any sense for him to be Scottish in this movie. 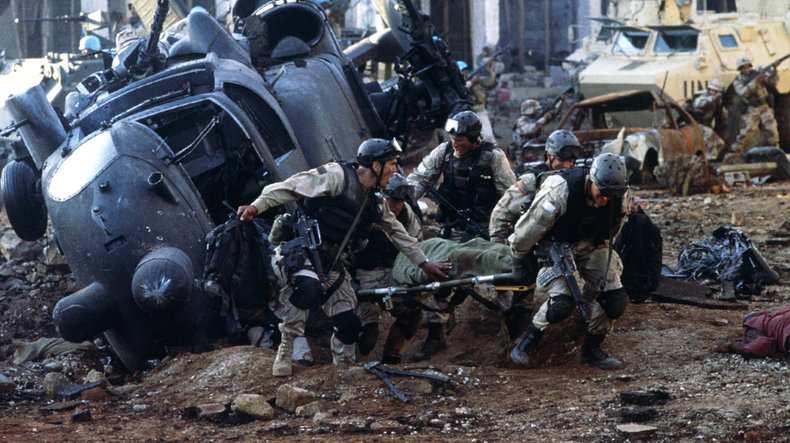 I can’t tell you if I liked the ending or not because I became bored half way through. This is the most boring war movie I have ever seen in my life. First, you are introduced to about twenty people in the first 20 minutes of the movie before the fighting takes over all of the plot. You don’t really know anyone, let alone remember anything about their characters. The only way I could tell people apart was because I saw them in another movie or tv show before. Someone would die and you wouldn’t care because you didn’t know anyone or you couldn’t care because there was so much dirt on their faces that you couldn’t tell who was shot.

I turned it off halfway with the slight intention of watching the rest later. Three days later, I just gave up. Now I have seen tons of war movies (Full Metal Jacket, Saving Private Ryan, Apocalypse Now, Platoon, Casualties of War, Hamburger Hill), but I usually don’t like watching them again and again because there is some part that disturbs me about it too much. Those were all more interesting than this movie.