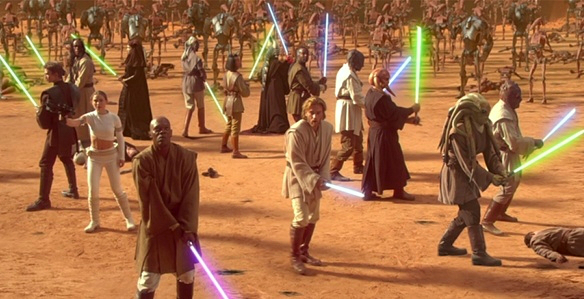 Anakin and Amidala fall in love, Ewan McGregor grows a beard and Yoda kicks butt. There’s also supposed to be hardly any Jar Jar Binks. Already an improvement over The Phantom Menace.

You might not want to read this if you haven’t seen it since there is spoiler info throughout.

The very beginning was a bit awkward. Obi-Wan and Anakin saying little jokes that fell really flat. This improved as the movie went on, but at the beginning it did not seem like they were two people that just spent the last 10 years together training everyday. It seemed like they just met a few minutes before.

I guess we are all really dumb and they have to beat us over the head with the romance stick. Did Anakin have to make the statement about thinking about Amidala every day for 10 years before he saw her again? Being that he ended up telling her this later, I think it would have been a tad more natural to see her again and then end up telling her later than just blurting it out every chance he got.

The first chase scene in the beginning through the city was entertaining and the searching through the bar for the killer was good too. The little jedi mind trick was amusing.

Why was Jar Jar even in this movie? I really didn’t need to hear that voice again and someone else could have stood in for Amidala during the Senate meetings besides him. He served no purpose in this movie. As annoying as he was in the first one, he had the purpose to be there for entertainment for kids. He didn’t do anything like that in this movie. I still never got how he was entertaining for kids. I watched Stars Wars growing up and R2-D2 and Yoda were enough entertainment for me.

Things were a tad slow and weird when it kept switching from Obi-Wan at the diner asking questions about who was trying to assassinate Amidala and then over to Anakin and Amidala in a field and then back to Obi-Wan finding out about the clone army and then the two lovebirds hanging out in front of a fireplace. Not great scene transition there and things just dragged on.

I thought the movie finally picked up when we meet Jango Fett and little Boba Fett. I heard I missed a great fight because I had to use the bathroom. Bad me, I know.

So, I came back into the theater when Anakin and Amidala are on Tatooine looking for his mother. At this point, I’m wondering about him not having any siblings and Amidala doesn’t seem to have any and who exactly are the aunt and uncle that raise Luke in Star Wars. Then we meet them. Good timing there.

Then we are back with C-3PO and R2-D2 and things are starting to feel like the old Star Wars again. Anakin goes a tad bit evil when he slaughters all the Tusken Raiders that had kidnapped his mother. Definately picking up in the action finally.

Obi-Wan manages to get himself caught when he spies Dooku (lovely name) heading up the separtist group that plans to kill Amidala. He does get word to Anakin and says to send it back to Windu and Yoda. When they hear word, they tell Anakin and Amidala to stay where they are since they are safe, and they will take care of Obi-Wan. Anakin and Amidala are crazy kids and go after Obi-Wan anyway.

Even though they do end up being captured when they reach Obi-Wan, they still would have arrived there a lot faster than the rest of the Jedis that took their sweet time having a vote before they even left the city. Good rescue team!

Anyway, we have more fun R2-D2 and C-3PO time while C-3PO gets taken apart again (I guess it is really for the first time since Empire Strikes Back hasn’t happened yet in the time line) and R2-D2 takes off on his little jets to save Amidala from molten lava-type stuff. Anakin gets his arm caught in some machine and for a bit has his hand and arm become part of a machine before he gets it out. That was some lovely foreshadowing. Then everyone gets caught, they declare their love for one another and then get taken out to be slaughtered. weee!

Now, the quips between Obi-Wan and Anakin are believable. It seems like they have known each other for more than a few minutes so big improvement over the beginning of the movie. The big baddie monsters come out. Big battle ensues while the three of them win over the monster. The droids come out and then the Jedis come to save the day. They fight in the arena, then they move out into the desert area for more fighting with clones against droids. Also, back in the arena, Windu kills Fett. We get to see little Boba Fett hold up his dad’s helmet and you just wonder, “Why didn’t his head fall out?”

Then we have Anakin and Obi-Wan chasing Dooku to stop him from leaving the planet. He wounds Obi-Wan and cuts off Anakin’s hand before Yoda arrives to kick some serious ass. That was hilarious to watch Yoda jump around all over the place and when he was done he went back to walking slowly with a cane (like the little old man I remember beating on R2-D2 in the swamps when he taught Luke).

So Yoda saves those two hooligans from dying but can’t stop the dork guy from escaping. Then Yoda goes back to looking disappointed and thinking hard and says something about the clone war just starting. Okie dokie! And then it looks like Anakin and Amidala get married (even though I thought Jedis couldn’t marry but what do I know). He does have a crazy new electric hand. Ah, the evil machine is taking over. aaggg!

So overall, what did I think? I thought it was better than The Phantom Menace but wasn’t the best movie out there. I loved the first three movies. I saw them in the theaters when they came out (even though the only one I remember is Return of the Jedi. My mom took me to see all of them). I saw them again in the theaters when they were re-released in original form and then saw them again when they were re-released with all the digital stuff added. I have both original and digital- stuff-added forms on video so I like the Star Wars movies.

I thought the first half of the movie dragged. I enjoyed the second half and can’t wait to see Anakin turn all evil in the third.