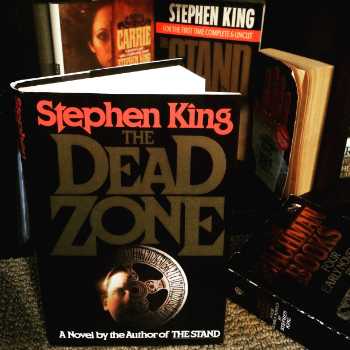 There were parts of this book that I really enjoyed and other parts that I feel that if I had read this earlier in my life, I might have been bored with, but due to the time I read it, I was hooked.

She suddenly realized she was sitting in an apartment by herself late at night, eating an apple and watching a movie on TV that she cared nothing about, and doing it all because it was easier than thinking, thinking was so boring really, when all you had to think about was yourself and your lost love.

I read this a few months before the presidential election of 2016. I saw a lot of similarities between the main villain in the book, Greg Stillson, and Trump. They weren’t politicians and some people liked that since they were dissatisfied with politicians. They both said whatever they were thinking without listening to their aides or handlers. It was eerie to read this book around that time. Of course, for those that know how this book ends, I don’t see how what happens to Stillson at the end of the book would actually change any of Trump’s supporters against him. That’s where fact and fiction split.

But this review isn’t all about that!

It is what I think made this book more interesting to me as it might have been otherwise. I found the beginning of the story, where Johnny Smith is falling in love with a fellow teacher, Sarah, compelling and his night at the carnival was gripping. Then, a car accident happens that leaves him in a coma for five years. When he wakes up, he finds out that Sarah is married with a kid, and that was devastating. She has had five years to grief and come to terms with him never waking up, while also moving on while he is in the same exact spot emotionally as he was when the car accident happened. It’s very sad and you can see them both struggling with their feelings.

I felt like the love story was really the main point of the novel, but it is also tied into the supernatural aspect where he can see glimpses into the future. Johnny becomes involved in helping to solve a serial killer case that is happening in Castle Rock before shifting his focus to what he sees in Stillson’s political future and the future of the country. I loved the serial killer case part since those kinds of stories are always interesting to me. I think the politics wouldn’t have been as interesting to me at any other time, and I would have thought a huge chunk of the book would have dragged, but since I read it when I did, my attitude changed.