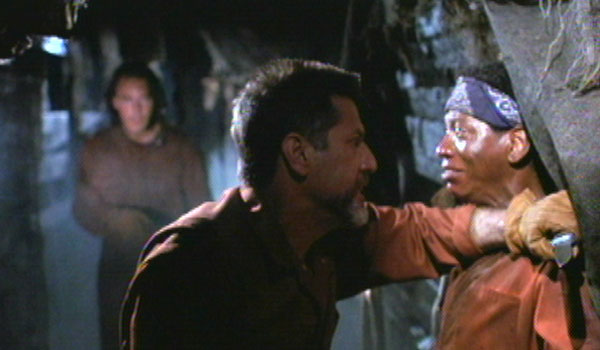 The Graveyard Shift was not my favorite short story. I viewed it strictly as a horror story about rats, but there wasn’t much else to it so it didn’t really stand out to me. I think I want some more substance to my horror beyond rats.  It probably has something to do with not finding rats all that scary, even though I’m sure they would have no problem eating me if they were trapped with me in a small room. I was not looking forward to watching the movie version of The Graveyard Shift. Then it turned out to be boring! Long stretches of arguing and taunting would be followed by something gross. 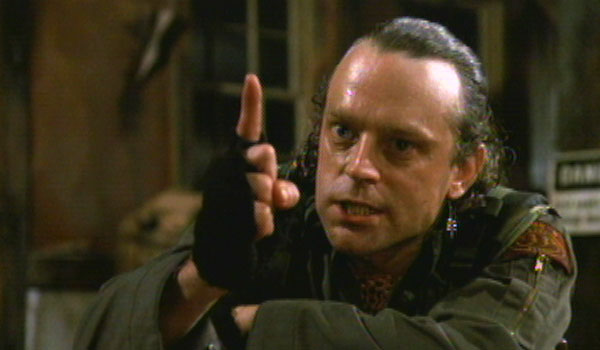 It takes place at a wool mill in a small Maine town. One guy working the graveyard shift decides to taunt some rats running around by throwing them in the wool picker. A huge monster rat that is only partially seen eats him. No one seems to be very alarmed by these events. Maybe small towns don’t notice people that go missing from graveyard shifts. The foreman goes ahead and hires a new guy who recently walked into town looking for work. Soon after he starts, the mill decides it needs to clean up the basement that is full of papers and junk furniture that has been there probably since the mill opened a hundred years ago. They get a crew together to clean it up and that’s when all the fun should start, yet it doesn’t.

Part of the problem could be that there didn’t seem to be any budget to show off the mutant super rat that is doing all the killing. Only a long claw is shown here, part of a mouth shown there, and at one point, it really looks like someone is being hugged by a huge bat, so I guess that the rat had mutated into some rat/bat thing. There is some tedious fighting and the movie ends.

I could not wait for it to end since I was so bored for most of this movie. There was only one good scene. One of the guys was trying to find his way out of the hellhole they have found themselves in and stuck his hand into a small opening to try to make it bigger so he can squeeze through it. Not surprisingly, something bit off half of his arm. That is not the best part. That would be when he started flinging his arm all over the place with chunks of arm that flew back to hit other people in the face. I love it when people are ridiculous.

Grade: D (I gave it a higher letter grade due to the flailing arm scene)