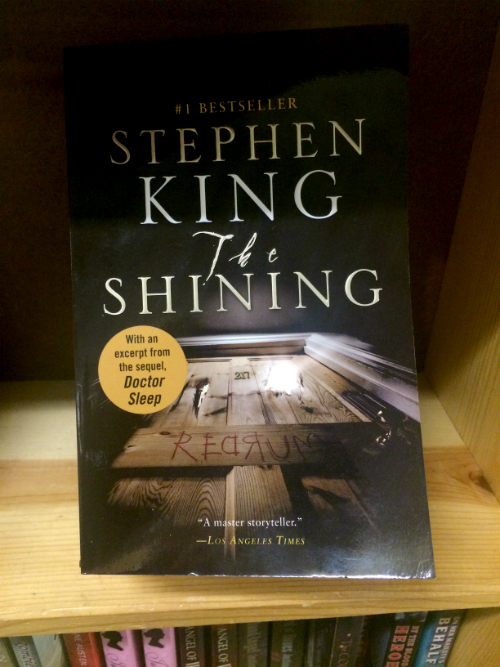 I only ended up reading a few books, mostly short stories by Stephen King before I quit reading his books back in high school. The Shining was one of them and it was my favorite. Parts of it scared me so much that when I was done reading one part, I had to put the book aside and go watch television with my brother so I would feel safer in my own house. Only bits of the book stayed with me, mostly because I have seen the Jack Nicholson movie version so much that it sticks in my head more. I knew there was more to the story than what was shown in the movie, but could not remember what exactly. I’m glad I was able to listen to the story again.

What I remembered was a guy with a former drinking problem gets a job as a winter caretaker at a resort hotel that will give him a chance to write his novel and spend some quality time with his wife and son. There are weird things in the hotel and it makes him crazy. Now that I have gone through the story again, I realized what I remembered was not completely accurate.

Jack Torrance has much more baggage than I remembered. He did have a drinking problem, but it did not stop there. Underneath that drinking problem was an anger problem. Even when he wasn’t drinking, he would get angry. Anything could set him off, including his students in his teaching job, himself at struggling while trying to write a play, his wife for suspecting that he’s drinking again due to his anger, or even his young son that adores him but sometimes can get underfoot when he is trying to work. Stephen King did a fantastic job making Jack Torrance into a monster, but not one that you don’t feel empathy for at times. The hotel feeds on what is already inside him and uses that to its advantage, along with what it senses in Jack’s five-year-old son, Danny.

Even though the book is filled with supernatural elements from lingering ghosts in the hotel to Danny Torrance being able to read people’s thoughts, feel their emotions, or see things that have happened in the past or may happen in the future, these elements would not get a foothold into the real world if it was not for Jack Torrance and his anger issues. That comes through in the line that is repeated a few times throughout the book, “This inhuman place makes human monsters.”

I got so much more out this book reading it later in life. At the time I first read it, I hadn’t encountered anyone in my life that had that much anger in them so I felt I skimmed over it and was scared by all the stuff going on in the hotel. The part I mentioned earlier that scared me so much involved a hedge animals with its supernatural elements that makes Jack think he’s going crazy. This time around, I thought Jack Torrance was the scariest part. Little by little his sanity is being eaten away and his anger becomes greater. His family is terrified of him since he becomes the real danger in that hotel.

I did not remember the ending of this book at all. I knew it was different from the movie, but could not remember what happened. I liked it so much better than Stanley Kubrick’s version. One thing I had noticed with Salem’s Lot and what I have heard from some critics of King’s work is he does not always know how to end a story. I felt that way with Salem’s Lot and maybe I will feel that way about some future books that I have not read yet, but The Shining is really solid from beginning to end. It is both supernaturally and realistically scary and filled with great characters and excellent storytelling. It has been one of my favorite books that I have ever read and so far, it is my favorite Stephen King book.