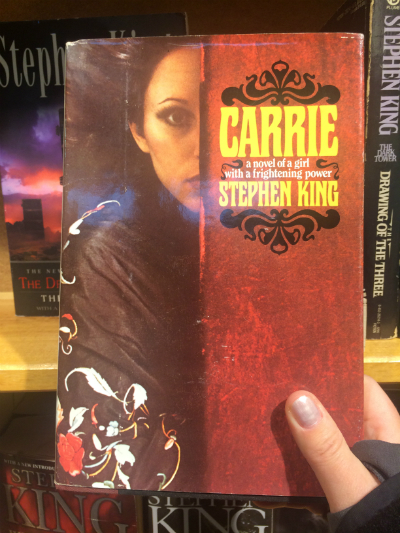 I recently decided  that I need extra incentive to get myself out walking each day, so I started a subscription to Audible.com to listen to audiobooks while walking. I figured if I only listened to a good story while walking, then that would get me out walking to listen to the rest of it. Around the same time I made that decision, I had remembered reading a Rolling Stone Interview with Stephen King where he talked about his life and works. I had read a few of King’s books when I was in high school, but I decided his stories were becoming repetitive and gave up on his collection long ago. I decided to give him another shot by listening to his works in order they were published. I am going to reread the ones that I read long ago to see what I think of them now.

I had never read Carrie before, but had seen the original 1976 movie a few times. I was familiar with the story about a shy, awkward girl who is raised by her extremely religious mother who thinks almost all things related to being a woman is a sin, including breasts, menstrual blood, liking boys, and anything related to sex, even among married people. When Carrie is punished, her mother locks her in a small closet so she can pray for Jesus to forgive her sins.

Carrie has telekinetic powers that come out when she is highly stressed. She does not realize she has these powers until after an incident at school when she gets her period for the first time and all the other girls in the locker room laugh at her for not knowing what is going on. Light bulbs break, but no one thinks it has anything to do with Carrie since they are too busy bullying her. Carrie doesn’t even realize she is the one that broke the light bulbs until much later.

King does an excellent job writing from Carrie’s point of view. He really gets inside the head of this teenage girl who is confused by what is going on with her, but has no one to talk to about it since she lives a sheltered life. The kids at school are so cruel to her, yet when a few of them feel bad and try to make amends, Carrie still doesn’t believe that they aren’t secretly laughing at her. It all seems too good to be true, which in a way some of it is, due to what happens with the famous prom scene at the end.

Even though this book was written in the 1970s, much of it still rings true today from the bullying in school to the extremely religious parent not wanting her child to know anything about the outside world because she believes it will corrupt her.

This story is classified as a horror story, but I did not find it traditionally scary. It could be that I knew what was going to happen from watching the movie before, even though there was way more backstory in the book, which I found fascinating and made Carrie’s mother even more screwed up than I thought she was in the movie. I did find the book frightening in the sense of Carrie’s mother reading her many passages from the bible to tell her how women are evil, basically by existing. Those parts truly scared me.