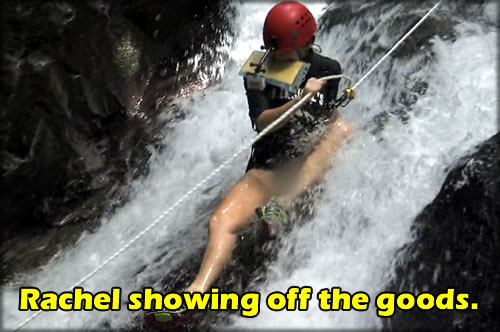 On the third leg of the race, the teams headed to Malaysia where some slid pantless down a waterfall, teams built bamboo rafts that promptly fell apart once in water, one team makes a major mistake by not reading their clue (like usual) while another one gets stranded without a taxi. Come read what Amy, Steve and I had to say about the March 8, 2014 episode “Welcome to the Jungle.” 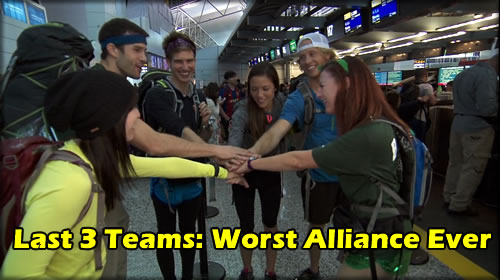 The teams learned they were headed to Malaysia and there were only two flights available for them to get on. The first six teams would make it on the first flight. Brendan and Rachel left in first place, but apparently had a horrible taxi driver since they arrived at the airport moments after the first six teams got tickets for the first flight. That left them battling for last place with YouTube and Express Pass Freakout. They all decided to be best friends while YouTube joked around that they were going to be the final three. Oh, YouTube. So hilarious. 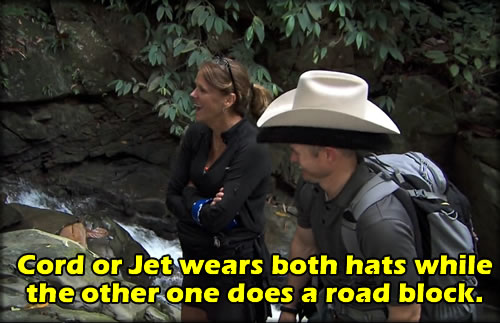 Once in Malaysia, teams found a road block. They had to take the Travelocity gnome with them and rappel down a waterfall to grab a clue halfway down. This was a very non-exciting task to watch teams do since they did it in the order they arrived. There was a slight switch up when Jet or Cord (we can’t remember which is which) missed the clue so he had to do it again. That caused Margie & Luke to move in front of them, but it wasn’t too much time. When the Globetrotters got there, Big Easy was going to do the task, but he was too big for it, so it had to be Flight Time. For some reason, when Brendan and Rachel arrived, she didn’t want to get her special shorts wet since she might lose some sequins so we got a nice blurred out crotch shot that made us weep for the poor editing guy.

The second flight was so far behind the first one, all teams were finished or at the road block by the time the second flight was finally headed to Malaysia. As much as I have complained in the past about teams bunching up together, it does make it more interesting to watch. I don’t like them so separated like this, even if I am not a fan of any of the last three teams.

After the road blocks, teams found a detour. All teams had to build a raft out of some bamboo and rope. While floating down the river, they stopped at which detour task they wanted to complete. They had to choose between picking up some food items and taking them to a chief or going through the jungle with a blow dart and hitting a fake bird target. After completing their detour tasks, they had to get back on their raft and go get their next clue. 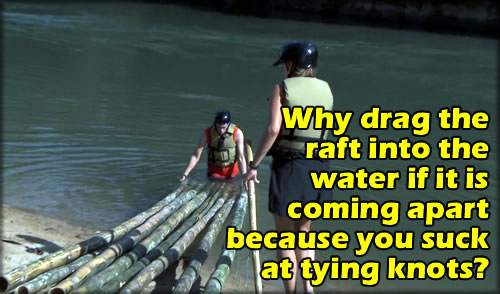 Building the raft looked hard. It apparently was hard for Margie & Luke because they put it together, the rope came apart and they continued to drag it into the water anyway.  Next to them, the cowboys raft looked beautiful. Steve said it looked like it was ready to go into the ocean. Margie & Luke had challenges because they couldn’t use their hands to talk to each other since they were sitting one in front of the other. At one point, whey they were drifting towards some rough waters, Margie turned around to see that Luke was just sitting there, not trying to guide the raft with the pole at all.

Dave & Connor passed by the detour location they were headed to that had a marker on it. When Connor asked if that was it, his dad said that the clue said they would pass six bridges. I wondered why he wouldn’t stop at the flag to check before they floated past it.  Amy said, “Rivers do not go in reverse.” Dave asked if Connor had the clue. Connor said it was in his pocket. Did they check it? Of course not. They continued on down the river. The Afghanimals came across the same sign and paused to read their clue again before realizing it was the spot. They were confused since Dave & Connor were not that far ahead of them, but couldn’t have delivered the food and continued down the river before they got there. They must have missed it. You are correct! When the Cowboys got there, the Afghanimals were coming back. They tried to hide for a bit, but then headed back to their raft. The Cowboys asked them if it was the delivery task or the other one. The Afghanimals said if it was last season, they would have lied, but they weren’t going to this season so they told the truth. Yay for them?

Dave & Connor finally realized they had missed their spot when they reached the other detour. They wondered how they could have missed it. Oh, I wonder. Did they switch detours at that point? No, they decided to carry the crate of food back up river instead. Their actions don’t make much sense to me. 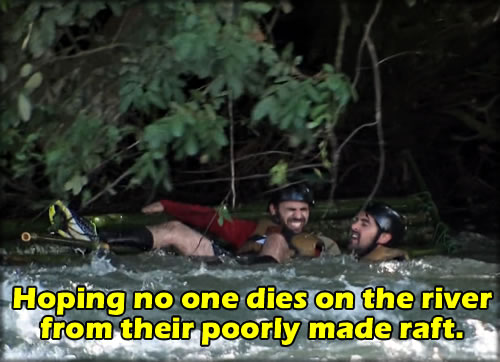 Meanwhile, the Afghanimals were thinking it was a great lazy river, until their bamboo raft got stuck in some crazy rapids and they fell off before climbing back on. Dangerous! As the Afghanimals gained control of their raft, the Cowboys floated by on their ocean-ready craft like they were floating in bath water. Quite a few teams did not do well with steering their raft, which caused them to hit the rapids and fall off or go crashing into trees and rocks.

Dave & Connor finally dropped off their food for their detour after the Afghanimals, Cowboys and Margie & Luke. They headed back to their raft which was at the very end of the river so they could get their next clue. They managed to make it back to the end of the river before any other team, even though they dropped off the food last. That means the river wasn’t that long since they were still in first place after their mistake. 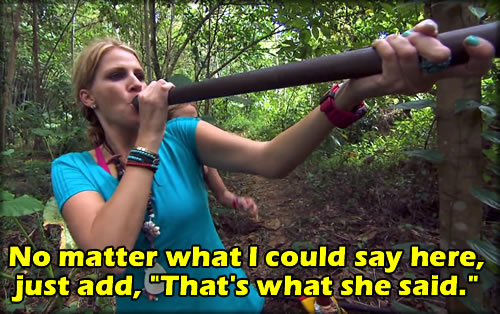 Both the Country Girls and Globetrotters had picked the blow dart detour. Jen and Flight Time were really good at it. They knocked down a bird right away. It took a few more tries for Caroline and Big Easy to get it done.

Around this time, the last three teams on the first flight were finally finishing up the road block. Even though YouTube was the last team to arrive at the road block and saw all the other teams holding their taxis, they let their taxi go. After all the teams had left and they realized they needed one, they learned that there was no taxis service out there. They had to walk down the road a bit to find someone to borrow their phone to call one. They had flash backs to the last time they were on the race and were stuck walking forever in Switzerland due to their own mistake.

There was no excitement in watching the last three teams though since there were three teams racing for first — Dave & Connor, Cowboys and Afghanimals. Dave & Connor came in first place and won a trip to Budapest. We also got to hear about Dave’s old injury again. Amy said, “Are we ever going to stop hearing about this injury?” Steve said, “Shut up already!” Cowboys and Afghanimals came in second and third place. 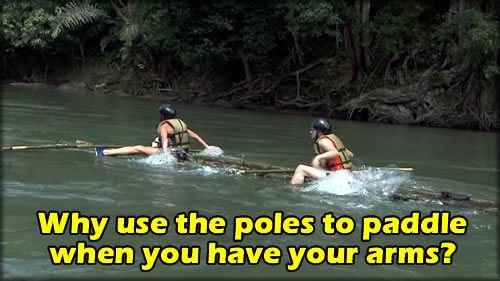 Margie & Luke had to stop many times on the river to tie their raft back together. They lost their rope at one point and had to use part of Margie’s shirt to hold it together. They gave up on the poles to paddle and used their arms for a while. Amy said, “I swear the mom is going to die on Amazing Race. It’s like that’s what she wants.” I asked, “Why do they keep doing this race? They aren’t very good at it.” 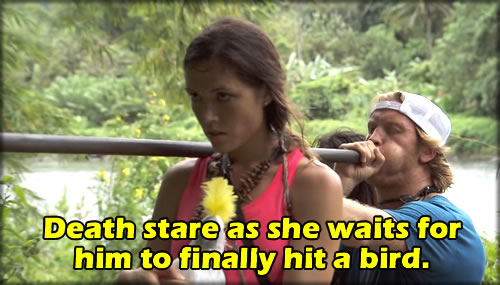 Express Pass Freakout picked the blow dart task. Jess hit the bird on the first try while John took many tries before he finally hit one. Jess looked so bored and like she was about to kill him while she was waiting for him to finish. Both Amy and I were confused why she was with him. He’s so weird!

Brendan & Rachel also did the blow dart. They were struggling with it and really worried about where YouTube was in the race. They were convinced they were in last place, but YouTube was still going down the river after building their raft. They were actually pretty decent at building their raft and only had a bit of trouble. YouTube couldn’t come back from wasting so much time trying to get another taxi so they were the last team to arrive at the pit stop and were eliminated. They told Phil they were a tough team, but they couldn’t compete with “these veterans.” Both Amy and I were confused since weren’t they a veteran team too? Oh, dumb YouTube.

What do you think about them being eliminated? Was it a mistake they let their taxi go or just something unfortunate that they couldn’t really get around? Was this leg exciting for you since the two airplane rides were so far apart that the last three teams had no chance of catching up? Is that just part of the game?