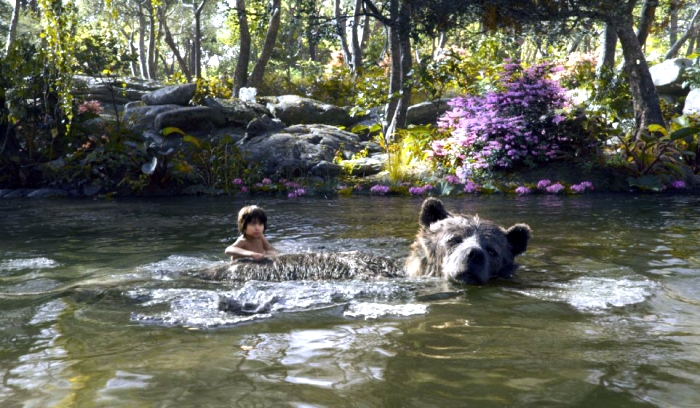 Recently, Disney has started to go back to its old animated films and remake them as live action movies. Last year there was Cinderella and coming up next year is Beauty and the Beast starring Emma  Watson, but now, it is time for The Jungle Book. I was wary when I first saw the trailer to this but that could be that I remembered loving the animated movie as a child. I haven’t seen it in years, but did have fond memories of it. I had heard this version had amazing CGI and on some movie screens in the country (super duper digital IMAX wubba wubba magic screens) the movie practically popped out at the audience, but unfortunately, none of those screens are in Portland. I had to see it on a boring old regular movie screen.

Mowgli (Neel Sethi) is a young boy who was found abandoned in the jungle and taken by a panther named Bagheera (Ben Kingsley) and given to a pack of wolves to be raised as one of their own. Raska is the mother of the pack that is voiced by Lupita Nyong’o with a lot of motherly warmth coming through. Mowgli is as happy as can be until one day, a tiger named Shere Khan, scarily voiced by Idris Elba threatens to harm Mowgli unless he leaves the jungle and joins his own kind. This starts the adventure of moving through the jungle as he heads to a human village. On the way he meets the giant python Kaa voiced by Scarlett Johansson, who sadly, does not sing the hypnotizing song that was in the animated version. It’s over the ending credits, but it loses that special something when not in the scene itself.  He also comes across a bear named Baloo (Bill Murray) who is hilarious  and the best part of the movie. He also sings a bit of “The Bare Necessities”. Finally, Christopher Walken is the unmistakable voice of huge ape, Louie, and when he isn’t being terrifying, he’s singing “I Wan’na Be Like You.”

The CGI in this movie is amazing. The animals talk, but their mouths move in a natural way so it wasn’t distracting. It was also hard to tell the difference between what was real and what was CGI, which is a definite plus because it kept my suspension of disbelief high so I could enjoy the movie. As for the forward movement of the plot, I found the first half of it pretty boring besides it looking pretty darn cool. The action seemed to pick up about halfway through and became more intense as it moved towards the finale. While watching the movie, especially Bagheera, I wondered if my love of black panthers came from while watching The Jungle Book many times as a child. It was sweet and sad to hear Garry Shandling as one of the small critters in the movie in what would be his last acting role.

As for the child actor playing Mowgli, I wasn’t too thrilled with him. Granted, he did have to act opposite a bunch of nothing throughout the entire movie so I should give him some credit. I found sometimes when he was arguing with an animal that he was shouting without emotion. I didn’t find him to be the best child actor but I guess he was okay in this role. Maybe I have been spoiled by watching too many outstanding child actors that I’m too picky.