I Should’ve Been a Boy Scout

This season of The Amazing Race is probably not going to go well. Phil called it a special season and I said it was a Special Stupid Season since every contestant has people that are popular on social media from YouTube, Vine or Instagram. Both Amy and Steve were expecting it to be annoying. I said, “I am hoping everyone will be so stupid, because they don’t know the show at all, that it will be entertaining.” Amy said, “You’re a generous soul with that wish.”

At first, I thought the episode started off interesting since everyone was at their homes watching a video message from Phil about starting the race right then and finding their clue in Mexico City. I didn’t mind not having to see everyone start at a race line. One difference though was Phil didn’t explain the rules like he usually does at the beginning of the season. He didn’t mention an Express Pass or Non-Elimination Legs. He could have done that off camera, but I am wondering how much the rules will change this season.

My first question was “Does everyone live with their parents?” There were a lot of younger teams and they all seemed to be leaving their parents’ house to head out on the race. Then there were introductions to all the teams. We barely remember any of them, even though Phil said they were all influencers. Amy said, “I’m uninfluenced apparently. Now if they had internet cats on the show, I’d know them.” 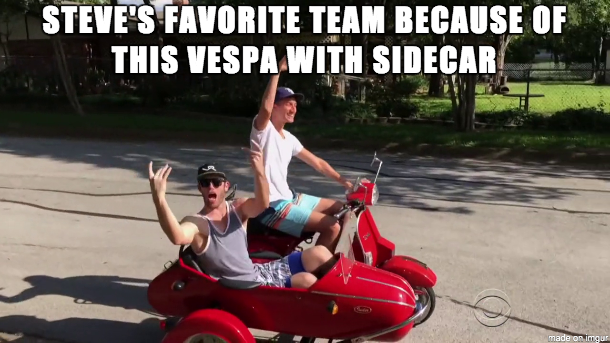 A few teams stuck out to us like the dancing team that Amy said, “So he’s like a less successful Channing Tatum?” There was the much older dad and daughter team where we found him to be creepy. Then there was the mom and the crying son. He cried before he left his house so he annoyed us right away. Steve was interested in the frisbee guys partially because of the frisbee but mostly because they were shown driving around in a Vespa with a sidecar. One mom was on the show for making one video that went viral. She didn’t even make the video. She was just recorded while giving a safety talk on a flight. Does that make  her an influencer?

Once teams landed in Mexico City and found Phil, they had a detour. The first one was going through tons of playing mariachis and try to find the one that wasn’t really playing. Most teams decided to tackle this by screaming “Who isn’t playing?” I’m not sure how that was considered a strategy except that annoying internet-famous people like to have people look at them, so they thought that would get them to reach their goals. Shockingly, they only found the non-playing mariachi once they stopped screaming and actually tried to complete the task.

The mom/son team stopped and asked some random guy on the corner if he was a mariachi. He said no and the kid asked him if he could play. Does he not understand how the game works? A clue won’t appear magically if you get random people to do what you want. Steve said, “I like when that kid is crying because he’s not yelling stupid shit.”

That detour was the fastest of the two since even teams that took a while to find the mariachis, they were at the next task before the other detour finished.

The other detour consisted of crafting a framework around a paper mache bull before adding fireworks to it and lighting it off. There was mass confusion when teams were trying to find detours, mostly because they could not depend on their phones to tell them where to go. They all thought they were getting eliminated at one point just by being lost. Some teams seemed to have arrived to the bull task around the same time as the mariachi task, but it just took longer to put it all together. It wasn’t very exciting to watch though beyond the fireworks display at the end. 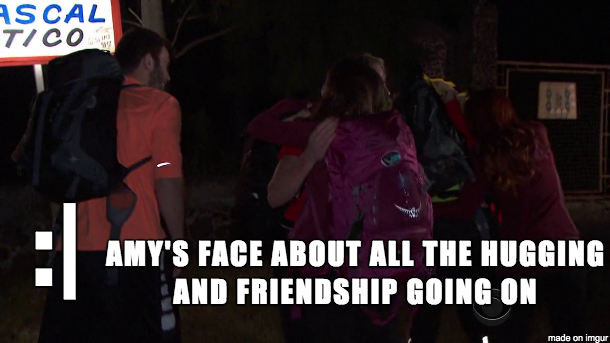 While teams drove from the detour to the next clue, one team told the taxi driver, “We are in a race at this point.” I said, “But only at this point!” Amy added, “Only for this second, and then we’re just on a very random vacation.”

Drums in the Ground

The next task was a road block. One team member had to go into a mine and sift through some dirt to find pieces of a mask that they had to reconstruct before being given their next clue. There were blue pieces and white pieces, but it wasn’t obvious at first that you had to have all of one color to complete the mask. Contestants were confused because at first they thought that the first thirteen pieces they found were enough, but then had to go back to sift some more. They also had to sift in one location and put the mask together in another location of the mine where some drums were playing. 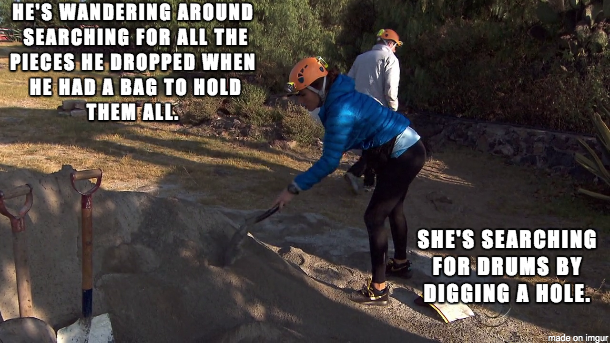 At one point, the daughter said her older doctor dad was amazing, right around the time he came above ground to find the drums that were in the mine. While he was wandering around searching for drums, he managed to drop all his pieces he had sifted through the dirt. He then had to spend time retracing his steps to pick up all the pieces. As he did that, one of the girls that I believe were the Instagram models, came above ground looking for the drums too, and randomly stopped next to a pile of sand to start digging and asking if there were little drums in the ground. It wasn’t until one other person came out of the mine and realized that the drums would not be up there and ran back down, that the drum digging model went back down into the  mine.

For some ridiculous reason when there was only three teams left in the cave, one team tried to convince another team to take the penalty. Already? On the first leg? Thankfully, someone finally found whatever piece they were looking  for and everyone was able to move on like normal.

It was a footrace between the dancers and another random team, but the dancers came in first place. There was no Express Pass given. They also didn’t win any other prize. Are the teams too annoying to give them extra stuff for coming in first?