I have never seen an episode of Jackass or any of the previous Jackass movies. I know what they are about, but I have just missed out on that part of society. I found that concept of Bad Grandpa hilarious though. Johnny Knoxville is dressed up like an 80-something old man who ends up having to watch his grandson for a few days and try to get away with horrible things while hidden cameras are nearby catching people’s reactions. It was like Borat, but with an old guy and a kid. I had to check it out.

I was surprised that the movie had an actual storyline. I thought it was going to be set up as Knoxville being made up as the old man, but that was his character. It starts off at his wife’s funeral and goes horribly wrong from there. Quite a few of the funny bits were shown in the trailer, including my favorite part at a little girl beauty pageant. I wished that part had not been in the trailer because I would have died laughing while watching it in the middle of this movie. There were other funny parts, but that one was my favorite. My other favorite part, not spoiled in the trailer, is when Grandpa stumbles into a male strip club. Nothing good can come from that. 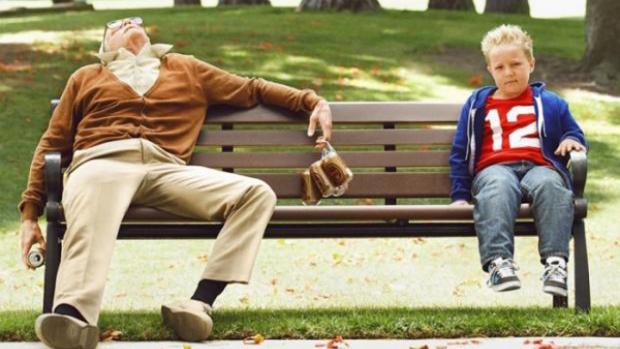 People’s reactions are the best part to what is going on. Some are confrontational, others are confused and others just laugh. It is what makes it all work. It also shows you how far some people will go with things that just aren’t right. Highly amusing. At one point, there is some sweetness that comes from some bikers. That sweetness carries over into the relationship with Grandpa and the kid. I didn’t expect that at all. I think my favorite part might be at the end during the credits where you get to see them explaining to people that it was all a joke and where the hidden cameras are placed. Some people are so relieved that none of it is real because it would be really bad.

In summary, everything about this film is low brow, but I didn’t expect anything more so it fit the bill.