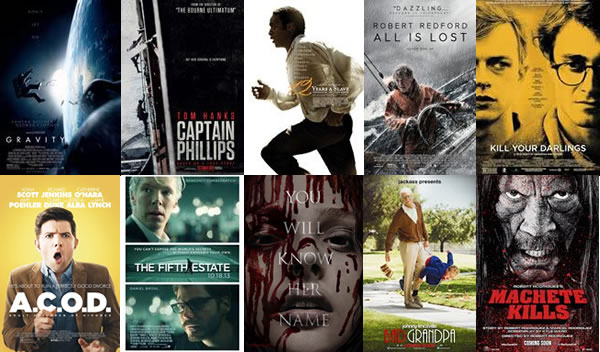 As we move closer to the end of the year, a few more Oscar bait movies are released with Gravity, Captain Phillips, 12 Years a Slave and All is Lost. Then, there is goofy and horror movies like Bad Grandpa, Machete Kills and the unnecessary remake of Carrie. Any of these movies look interesting to you that are coming out in October?

Astronauts try to get back to Earth after debris crashes into their shuttle and sets them loose in space.

A lawyer makes on illegal deal that ends up turning into a really bad situation.

My take: It has Michael Fassbender so of course, I want to watch it. Javier Bardem’s hair also looks amazing.

Johnny Knoxville puts on old man makeup and goes on a road trip with his “grandson” for some hidden camera shenanigans.

My take: It shouldn’t be funny, but it looks really funny.

An adult child of divorce thinks he grew up well adjusted until he finds out he was part of a divorce study as a kid for someone to write a book and that messes with his mind and current relationships.

My take: I love the cast. It looks like it would be a cute and enjoyable, but not outstanding. I still want to watch it.

Sequel to the cult hit Machete, which came out of a fake trailer in Grindhouse. The plot is pretty much summed up in the movie title.

My take: It looks absolutely ridiculous and fun.

A stressed out guy finds out he has a creature that lives in his butt that comes out and attacks the things that stress him.

My take: What is happening?!?

Tells how the legendary rock club got its start in 1973.

My take: I always wished I could have gone there before it closed.

Based on the memoir of a free black man in 1841 who is kidnapped in New York and sold into slavery in the south.

My take: This one is getting really good buzz at film festivals.

Biopic about Wikileaks founder Julian Assange and his partner and friend Daniel Domscheit-Berg.

My take: I’m not sure what to think about Assange since I agree with some of the things he does, but also view him as an asshole. Since he is pissed about this movie, it makes me want to see it.

Daniel Radcliffe plays Allen Ginsberg in 1940s New York City who meets William Burroughs and Jack Kerouac before getting involved with a murder.

My take: I wasn’t too sure about a Beat poet film, but the murder plot is intriguing.

A man is on a sinking sailboat in the Indian Ocean.

My take: I don’t know if I can handle that much tenseness for an entire movie.

A remake of the Sissy Spacek horror film about a telepathic girl that is seen as a weird freak by the mean girls in school with updated teasing to include pictures on smartphones.

My take: I think most remakes are unnecessary, but this one does make me interested in seeing it.

Another movie version of Romeo & Juliet, this time brought to us by Julian Fellowes (Downtown Abbey).

My take: I don’t know if I need another version of this story, but the cast looks great.

It looks at the JFK assassination from the perspectives of other people like Zapruder, Oswald’s brother and the doctor at the hospital when JFK was brought in.

My take: Interesting perspective, but does it really say anything new?

Blue is the Warmest Color

A love story that follows two girls over ten years starting when they are 15.

My take: Foreign films that are afraid to have subtitles in their trailers drive me crazy. I have no idea if I want to see it since they just looked at each other a lot over music.

A guy who tests prisons to make sure no one can break out agrees to one last job where he is tricked and actually locked up in it. That only leaves him to befriend Arnold Schwarzenegger to try to get out.

My take: I’d much rather watch the first season of Prison Break again.

All the Boys Love Mandy Lane

A girl that all the boys want, but she won’t let them have, decides to go to a weekend ranch party where people start dying.

My take: Is she killing them or is this just a standard slasher flick?

A college student pays for school with online gambling until he finds out he was cheated out of winning and ends up in Costa Rica talking to a big gambler guy who shows him the rich side of life until the FBI catches up with them.

My take: The beginning sounded interesting and then when he is in Costa Rica, it looks like it wants to be one of the Fast & Furious movies without the racing and just the boring other stuff.

Based on the true story from April 2009 when Somali pirates hijacked a cargo ship for ransom that led to a standoff with the U.S. Navy.