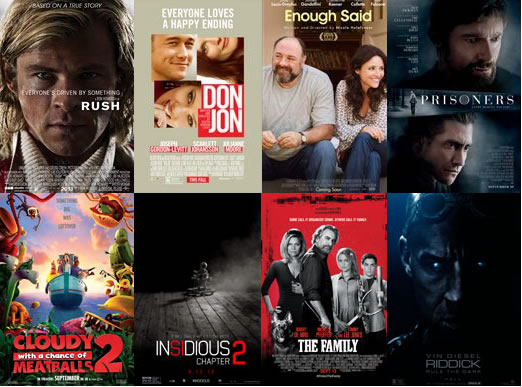 Here are some of the major movies coming out in September:

Covers the 1970s Formula 1 racing rivalry between a British playboy and an Austrian perfectionist.

My take: It stars Thor and has tons of accents. Of course, I want to see it.

My take: I love Joseph Gordon-Levitt so I want to watch anything he’s in.

It picks up where the last movie left off with the family trying to get over what happened, but they are still connected to the spirit world.

My take: The first one was fairly creepy. This one looks like the same level of creepy and unintentionally funny.

A group of people dealing with serious addiction try to have normal relationships again.

My take: For such a serious topic, it comes across like it wants to be a cute romantic comedy. That doesn’t seem classy.

Metallica Through the Never

Metallica plays an arena concert while their roadie deals with a riot happening in the streets of the city.

My take: I’m not a Metallica fan, so I have no interest, but if I was, I would be all over this.

Julia Louis-Dreyfus plays a masseuse who ends up taking on a new client that just happens to be the ex-wife of the man she started dating.

My take: It looks like a smart romantic comedy and I love the cast.

A single woman decides to revisit old exes hoping for a date to her younger sister’s wedding in a month.

Cloudy with a Chance of Meatballs 2

My take: I never saw the first one, but this looks hilarious.

Two young girls go missing. Jake Gyllenhaal is the detective trying to find them. Hugh Jackman is one of the fathers who wants revenge on the main suspect (played by Paul Dano) who they don’t have enough evidence to charge him.

My take: Good cast, but vigilante plots are tiresome to me.

A massage therapist develops an aversion to touching people, which really affects her career choice.

My take: I like the cast, but is too quirky to be taken seriously.

A mob man-turned-snitch has to keep moving his family around when his cover is blown before they finally think they have found a good place to hide in a quiet French village.

My take: The comedy seems forced and predictable.

Vin Diesel plays the guy who can see in the dark and is stuck on a super dark planet fighting weird creatures in the night.

My take: I hated Pitch Black. Not sure why they made The Chronicles of Riddick. This one really looks like it is the same plot as the other movies. Why do they keep making it?