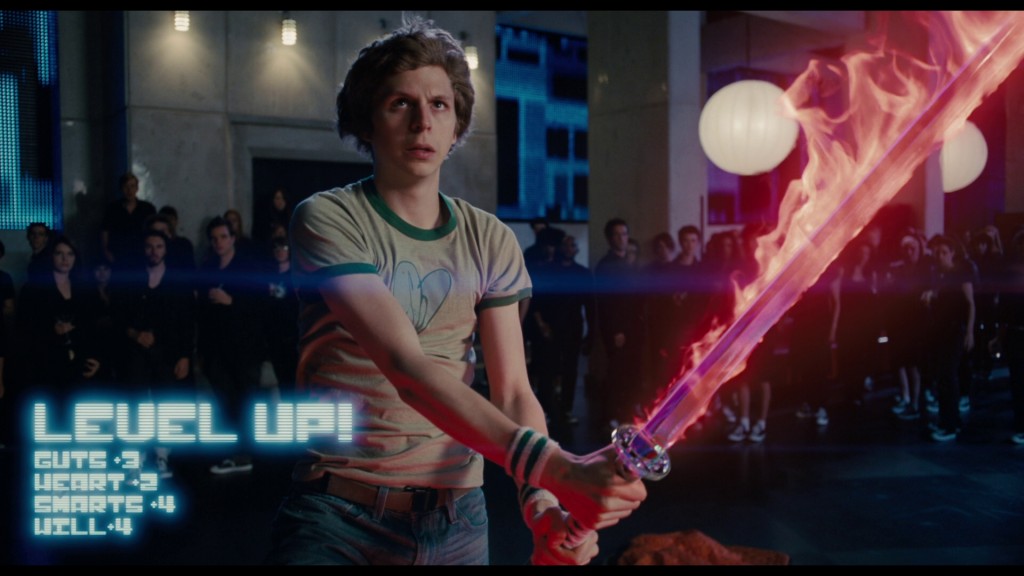 I’ve seen Shaun of the Dead and Hot Fuzz and even though they were different movies, they had the same two leads and they parodied movies –zombie and action movies. I would not have guessed this one was by the same director. First, it didn’t star Simon Pegg and Nick Frost. Second, it was just in a different vein. It is a mix of video game and comic book. When Scott Pilgrim has to make a decision, a decision wheel pops up in his head. When the phone rings, it actually says “Ring” on the screen. When there are fights, it is like watching the old Batman cartoons with the “Wham” and “Pow” popping up on the screen.

Scott Pilgrim is in a not very good rock band and he starts dating a high school girl that worships him and his band. Then he runs into another girl that he falls for immediately. The drawing that he shows a guy at a party to find out her name is excellent. I have no idea why he’s so infatuated with her because she isn’t given much time to actually talk in the movie. She isn’t much of a character, but it is easy enough to ignore since the movie is fun. She has seven evil exes that Scott has to fight in order to date her. That’s the only time that I wondered why he would fight people when he barely knows her, but I just went with it.

The seven exes are funny, the fight scenes are hilarious and the entire movie was highly entertaining. While Michael Cera plays himself in every movie he has ever been in, and he is the same way in this one, it does seem to be to a lesser degree. I didn’t find it to be a distraction like it could be in other movies. I also found his roommate to be very funny. He’s Macaulay Culkin’s brother. We decided he looked like his brother, but wasn’t as odd looking.That was a bonus. He could have been in it more than he was and I think it would have added to the movie.