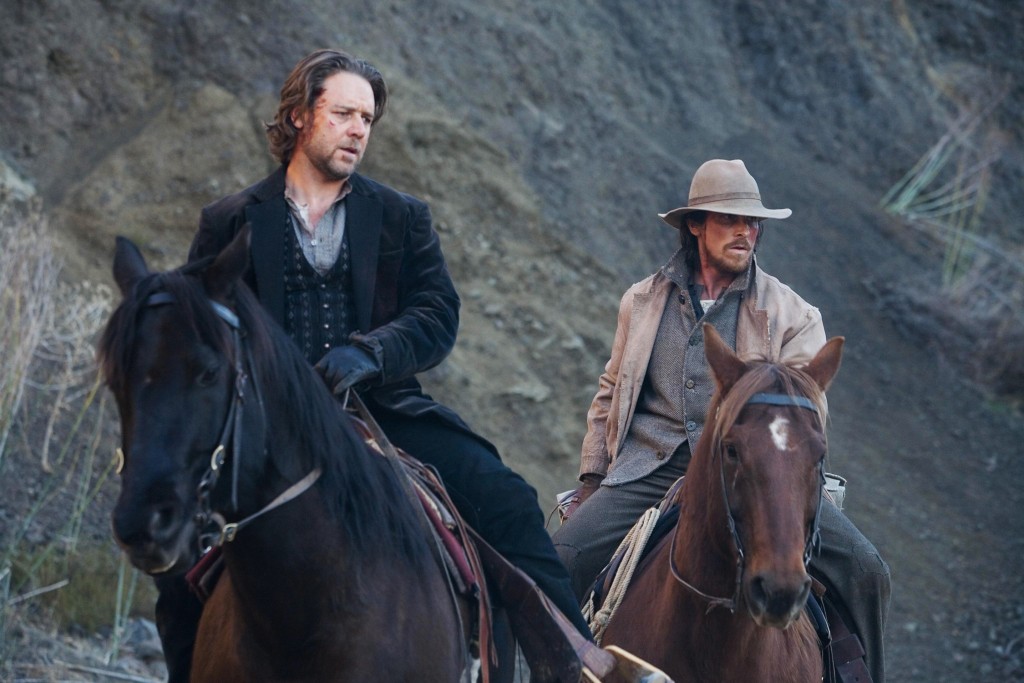 Christian Bale is a rancher who is apparently in debt and who’s land is in the way of building the railroad.  During a little cattle drive thingy with his sons, they stumble on Russell Crowe and his gang holding up a stagecoach.  Crowe lets them live, but steals their horses.  They find their horses a little ways away and make their way back into town with the lone survivor of the robbery. 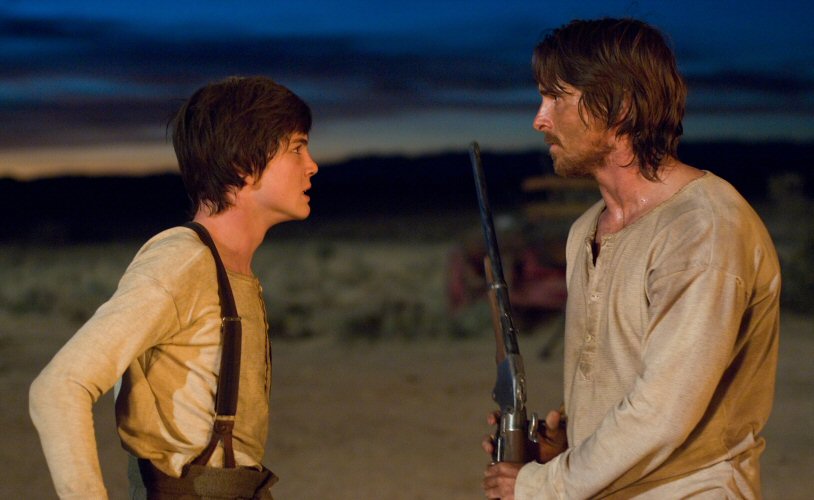 Crowe gets arrested shortly after they get back into town by the sheriff.  They set up a little team of lawmen and railroad people to transport the criminal to a nearby town with a railroad station so they can send him to prison to be hanged.  Evidently he’s robbed and killed lots of people.  They need extra help since Crowe’s gang is trying to free him, so they recruit Bale, who desperately needs the money.

As they head for the town with the train station, Crowe’s gang pursues and attacks them, Apaches try to kill them, and Crowe escapes once and gets recaptured by some railroad building people who want to kill him since he killed some of their family members previously.  He’s an awesome guy.  Christian Bale and the original captors eventually find and take him back though from the railroad builders

Once they get into the town, they barricade themselves into a hotel waiting for the 3:10 to Yuma train and recruit reinforcements of local deputies.  Unfortuantely, for them, Crowe’s gang offers anyone in the town money to kill any of Crowe’s captors and so people start lining up to free him.  It’s the wild west, apparently it’s okay to do stuff like this.  Anyway, eventually the only people left guarding Crowe are Christian Bale, one of his sons, and a railroad official who bails on them.  Before that, Bale makes a deal that if he can get Crowe on the train, the railroad official will go give a ton of money to Bale’s wife.  I wasn’t paying enough attention at the beginning to know if it’s enough money to save their ranch and get them out of debt, but it was a lot.  Bale and Crowe then make a run for the train and a huge shootout ensues with what’s left of Crowe’s gang and the townpeople looking to cash in.  Through the course of the last act, Crowe starts to respect Bale for what he’s doing for this family and actually helps him along the way.  This is partially because people are shooting everywhere and there’s a good chance Crowe will die in the fight and partially because he tells Bale he’s been to Yuma prison twice before and escaped, so it’s really not that big of a deal for him to get on the train.  There is also a lot of cattle in this movie if you’re into that sort of thing.

I’m not a huge fan of Westerns, but this movie really is excellent.  There are lots of recognizable people in this movie playing small parts like Peter Fonda as the guy who survives the stagecoach robbery, fat Luke Wilson as some random cowboy, and Gretchen Mol as as Christian Bale’s wife.  She’s only in the movie for like 10 minutes, but she manages to look all constipated and unhappy, just like every other movie she’s in.  Also, Ben Foster plays Crowe’s right-hand man and leads his gang to try and rescue him.  He’s awesome and just shoots people randomly.  Yet another piece of evidence in why you should not trust gingers.  My favorite random part of this movie is a little spoilerish, but basically, Russell Crowe is trying to escape and has taken Peter Fonda hostage, then he just throws him off of a cliff.  Awesome!

I’m not sure this movie is really suitable for repeated viewing, but it’s definitely worth watching one time.

Rating: Four stars out of five