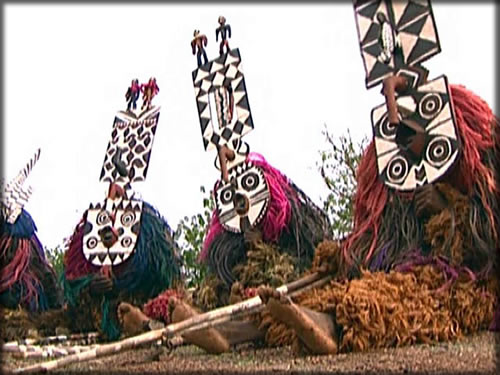 One thing I wished with this show was that the teams would spend more time in one general area so there isn’t that much time spent in airports. The airport drama bores me since it hasn’t really changed since the first season. I love watching everything else that happens with the teams during the detours and road blocks. I loved this episode since they stayed in Africa.

After spending the night outside of Bingo, the teams found out they needed to walk to a nearby village to find a tribal chief. Once they were there, they received their next clue and a bag where they had to put in a chicken. They were required to take the chicken along the entire leg. If they didn’t have it at the pit stop, they couldn’t check in.

The clue told the teams to head 100 miles by taxi to Bouda Peletanga where were convenient taxis out in the middle of nowhere. Azaria & Hendekea arrived there first, but Hendekea needed to find a bathroom so while she ran around looking, Nathan & Jen and TK & Rachel ran to the clue box to find a detour.

Shake Your Booty
Teams that chose this task: 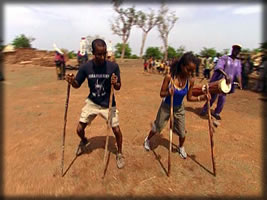 Nathan and Jen chose the dancing task since Jen used to be a dancer for the LA Clippers. They chose a dancer to show them the dance moves so they could imitate them. TK & Rachel also chose the detour, but while watching the dancer, they found it too complicated and ran off to mine some gold. Nathan and Jen did a decent job of copying the dance, but they didn’t add anything creative to it. When they finished the bystanders just stared at them and the judges deemed their dance not good enough. They received a penalty. Jen was embarrassed at herself and said she wouldn’t hear the end of it from her dancer friends back home.

Azaria & Hendekea went next and made sure to add some new steps into the dance routine. They received applause from the bystanders and the judges were very pleased. I expected a nasty comment out of Jen standing in her penalty area, but nothing was shown. Azaria and Hendekea headed off to the next clue. Even though Nathan and Jen were penalized, they weren’t too far behind Azaria and Hendekea in getting to the next clue and they were ahead of TK & Rachel that were taking a long time to mine gold.

The father/daughter team of Ron & Christina picked the dancing since Ron was a supposed wild dancer. They knew they could add some creative moves, but they were not creative enough. They were the second team to go to the penalty area before they received their next clue.

I wasn’t sure what the African people were going to think of the goths, especially when Kynt warned Vyxsin that he was going to go all crazy. Vyxsin mostly did the dance with a few other things thrown in while Kynt went insane using the dancing sticks like a fighting monk would use, flailing them around everywhere, as if he was Darth Maul. The bystanders and judges loved it and they received their clue without penalty.

Shana and Jennifer decided to do some stripper version of the dance, which seemed disrespectful to me, but the judges contemplated and liked it so they didn’t receive a penalty and took off towards the next clue box.

Lorena and Jason showed up at the detour so far behind any other teams due to Lorena’s freak out with the camels in the last leg putting a lot of time between them and everyone else. Lorena and Jason met dancing so they chose the task for Lorena’s love of dance. They finished successfully.

Shake Your Pan
Teams that chose this task:

TK & Rachel were worried about not performing the dance well enough and getting a penalty so they chose to mine gold, but it took so long, they could have danced and received the penalty before they finally finished this detour. Azaria/Hendekea, Nathan/Jen, Kynt/Vyxsin and Ron/Christina all finished the other detour choice before they had finished. Nick and Don showed up and had no problem with the task. Grandpa jumped right in the mud and got a good pile of stuff. They put it in the pan, poured water over it and found gold right away. They finished and ran towards the next clue. TK and Rachel weren’t pouring water into their pan to sift through the stuff to find gold so everything was covered in mud and made it harder to find the gold. TK and Rachel finally finished around the same time that Shana and Jennifer finished dancing.

After finishing the detour, the next clue told the teams to head to the Peletanga Market and they could also U-Turn a team. It is a twist on the former Yield where a team could pick another team behind them to U-Turn. That team would have to go back and do the other detour before they continued on. I love this twist. It is much better than the Yield where someone would stand to the side of the mat and cry for being picked. They actually had to go do something. It might be something that is done quickly or it could completely kill a team since some detours are hard. It said it would only happen twice on the race and teams can only use it once. I think it should happen each leg, but then I miss that the fast forwards aren’t on each leg any more either since they didn’t always help some teams.

All, but one of the teams decided not to U-Turn another team. When Nathan and Jen were there, Jen said she wasn’t going to U-Turn anyone and win the race “like men”. I guess women cheat? Oh, I don’t like Jen.

Shana and Jennifer showed up at the U-Turn right before TK and Rachel. They saw a team behind them and thought it was Lorena and Jason. Apparently, they don’t socialize with the other teams enough to figure out what they look like. Or they don’t have helpful captions under their pictures on the tv to help them remember. 🙂 Shana and Jennifer wanted to get away from the team that was running up to them, and thinking it was Lorena and Jason, they U-Turned them. TK & Rachel ran up and were relieved they were not picked. The blondes worried about their decision, well at least Jennifer did. Shana said they had to do it in order to win. Not when you pick the wrong team? I considered it a waste since Lorena and Jason hadn’t even arrived at the detour yet.

When Lorena and Jason arrived at the U-Turn, they were shocked to find their picture there. They were hoping they had made up some time, but they didn’t lose their spirits and headed back to do the gold mining task. They were working on that around the time that TK/Rachel and the blondes showed up to the road block. They probably would have caught up to the teams at the road block if they hadn’t been U-Turned. It didn’t seem to take them too long to finish the other task though, but when they were in their taxi ride to the next market, they had the feeling they were going to be in last place.

Roadblock – Goat in a Basket

After the U-Turn, the teams had to grab another taxi out in the middle of nowhere and head to the Tampouy Goat Market. There the teams found a road block that asked which one of them could handle a juggling act. Some teams took this literally. It was more to do with balancing items on a bike rather than actually juggling them. 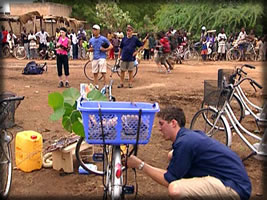 The task was to load up a bicycle with some really random supplies, like a couple of jugs, plants, and a goat in a laundry basket. Poor little goat tied down in a basket. I did enjoy the goat that Jen had since it tried to eat her clue. Go goat! At least no one was mean to their goat like some were mean to their donkeys in the first episode. The teams had to take the unwieldy bikes and find a specific vendor (different for each team) to deliver the goods.

Nick, Christina and Vyxsin all worked on the roadblock at the same time. Nick and Christina didn’t have too much trouble loading up the bike, but Vyxsin became frustrated with her bike that would not stay up while she was loading it. The kickstand seemed to be broken, but there wasn’t anything she could do after she picked it so she dealt with it. All three of those groups finished around the same time and headed off to the pit stop. On the way, Vyxsin broke down crying. She loved the people of Africa. She found them so open and accepting to everyone, but felt bad for their poor living conditions.

Shana and Rachel showed up at the same time for the road block. While Shana worked on the roadblock, Jennifer was becoming more and more worried about their U-Turn choice. Rachel found her vendor, but then became lost trying to find her way back to TK. She was not staying very calm and collected like TK say over and over again. Maybe that’s why he repeats it since she’ll freak out if he doesn’t. She finally found him not too long after the blondes had taken off for the pit stop. Still no sign of Lorena and Jason.

Azaria/Hendekea and Nate/Jen took off for the pit stop at the same time. They had to take their taxis to the Hotel de Ville. Both taxis showed up at the hotel at the same time and it was a foot race to the mat. Azaria is always yelling at his sister to run faster, but she ran right to the mat when he ran the wrong way. He ran to the mat just before Nathan and Jen. They came in first place, which led Jen to be pissed off. She thought that since they had come in first two times already, they could give someone else a chance to come in first. Wha? This isn’t give everyone a trophy for being a winner game. I know if the tables were turned, Jen would be on that mat in first place every time and not giving anyone else a lead just so they could come in first. Can Jen leave now? She is such a sore loser and a nasty, spoiled brat.

Ron/Christina and Nick/Don showed up at the same time on the mat. No one was nasty to the other team about getting their first and it seemed like the Ron and Christina finally got over their little spat with Nick/Don at the airport a few legs ago. The goths showed up not long after them, and the blondes came in sixth place, followed by TK and Rachel. Lorena and Jason did come in last place, but they exited gracefully.