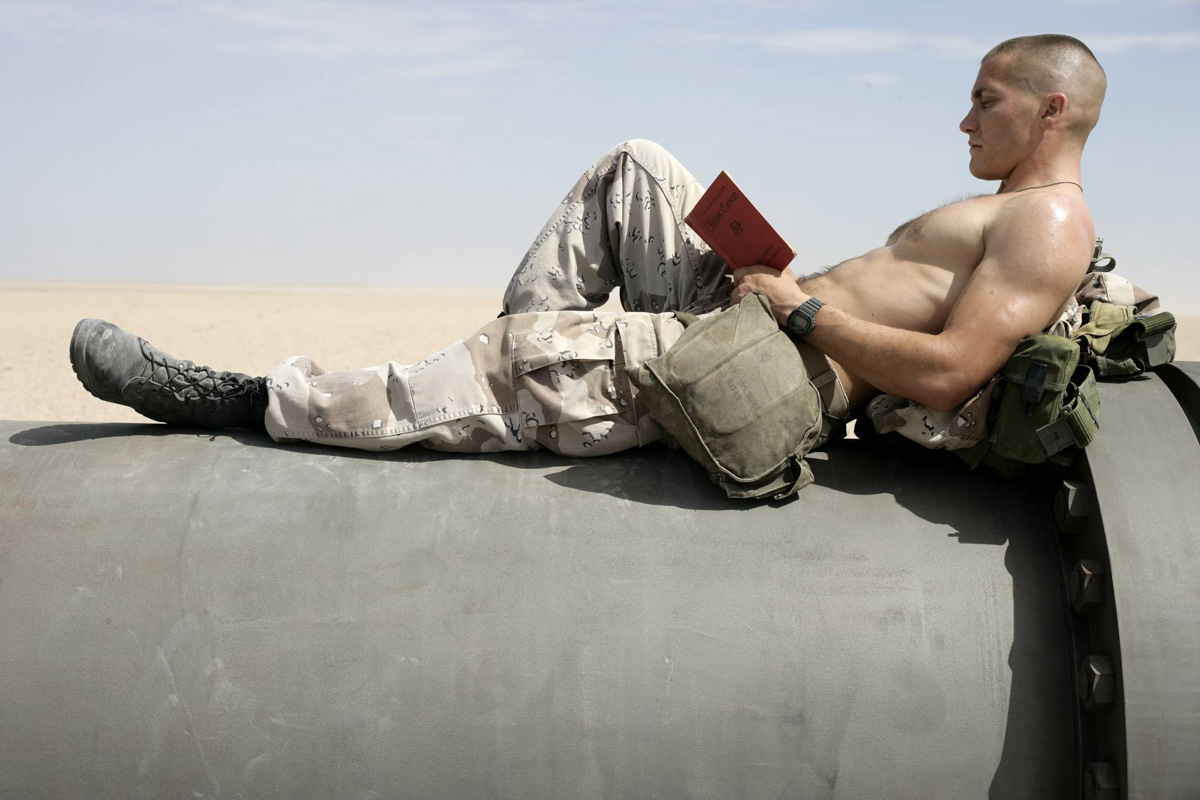 I wanted to see this movie because of the actors involved and I have liked Sam Mendes’ movies, especially American Beauty. I like Jake Gyllenhaal as an actor, and he also was super hot when he was all buffed up for the movie. There were also other good actors in it too: Peter Sarsgaard (excellent in Garden State and Shattered Glass), Jaime Foxx and Chris Cooper (fabulous in American Beauty and Adaptation).

I’m not the biggest fan of war movies, but I really wanted to see this movie because of all the people involved. I had also heard there was much male nakedness in the movie and you really can’t go wrong with that when the guys are all buff marines.

Well, I was a bit disappointed. First, for all the talk of nakedness, there wasn’t as much as I thought there would be. There was the fabulous scene of Swofford (Gyllenhaal) wearing two strategically-placed Santa hats, but that’s it. There were a few other scenes with guys walking around shirtless. For it being a million degrees in the desert, they wore too many pieces of clothing.

Second, the movie was all over the place. I didn’t really connect with any characters. I knew they were bored because the voice over told me. I knew they were going crazy because Swofford almost went homicidal on one guy and Troy (Sarsgaard) almost has a breakdown when he wasn’t able to perform his sniper duties since a higher-up (President Palmer aka Dennis Haybert) wanted to just blow the shit out of an entire building. Other than that, there seemed to be a bunch of scenes stitched together with no major plot line going on.

I also didn’t really get the Swofford character. At times, he was made to be a big lunkhead, and the only thing he seemed to be good at was being a sniper. Then there were scenes where he was reading Albert Camus’ The Stranger and talking Arabic. I was fine with him being average Joe-intelligence, but was thrown when he was presented as an intellectual, when it didn’t match up with other actions he made.

The movie tries to be emotional with scenes of war-horror and sadness towards the end of the movie, but I never felt sad watching it. I just didn’t connect with anyone while watching it. I did like when they calling the Corps, “the suck”. I thought that was excellent. I also enjoyed them calling one of the marines Squishy Face, and how much he hated it. He was horrible, but I liked his nick name. It fit him perfectly.

It wasn’t a horrible movie, but I expected it to be a lot better, even without all my nudity nonsense.