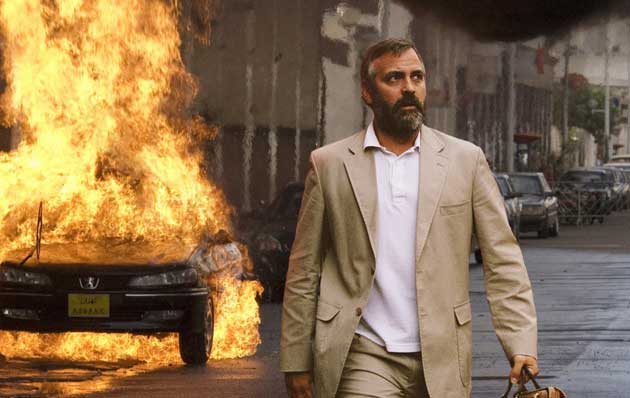 While watching this movie, it reminded me a lot of Traffic. There were a lot of story lines going on that were all related to the overall plot of the movie, but not all the characters interacted with one another. After I watched it, I found out it was made by the same guy that made Traffic. I think if you enjoyed that movie, which I did even though I never felt the need to watch it again, I think you would enjoy this movie. I actually wouldn’t mind watching this one again, but mostly because I had to go to the bathroom during it and also fell asleep during one part of it. That’s what happens when I go to happy hour before the movie starts.

George Clooney plays a CIA field agent who wants out of what he’s doing, but he seems to be the best guy for any job in the Middle East because he speaks Arabic and Farsi. He’s jerked around a lot by the CIA. They like to blame things on him and leave him out to dry quite a bit because he’s not used to office politics, but better at being in the field.

Matt Damon works for an energy company that is trying to pitch its company to the Emir of a Middle Eastern gulf coast country that is selling its oil to other superpower countries. He ends up becoming friends with one of the Emir’s son who hopes to be announced as the next Emir since his father is so sick. He is competing with his younger brother who also wants to be Emir and has ideals closer to his father’s.

There is also a corporate lawyer that is proctoring the interests of two oil companies in a merger, but also looking out for himself in the process since he’s really ambitious. He uncovers some corruption and makes sure that he comes out clean in the end while making sure the merger goes through.

Finally, there is a storyline about how the various countries (U.S., Russia and China) come into various Middle Eastern countries to set up their oil rigs and employ local workers. As mergers happen, and various areas change hands, local workers are put out of work at a moment’s notice. It shows how some Middle Eastern men still manage to dream while they can barely find anything to eat, while others get frustrated by the entire situation in general.

Tons of story lines going on. I think I would have liked the movie better if it focused on certain story lines more. The mergers were important for the overall story, but weren’t too exciting to watch. It also isn’t a big surprise to me that oil companies and executives are corrupt to some extent. The story line with the two princes wanting to be Emir and Matt Damon’s storyline were the most interesting to me. The frustrated kids just made me sad overall, especially at the end. The entire movie ended up making me sad because most of what it is saying is true to some extent and the world is just messed up. This is not an uplifting movie.