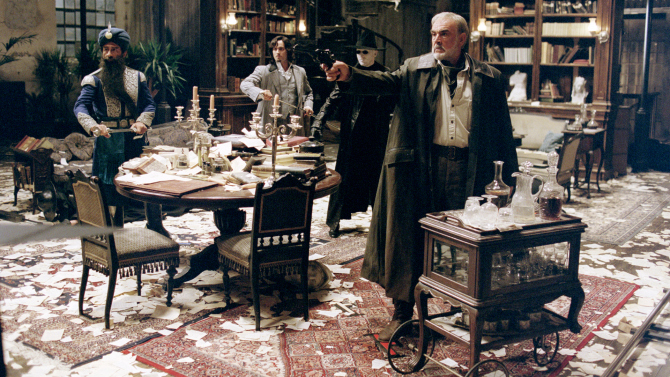 Sean Connery leads up the next-in-line comic-to-movie. This one is based on Alan Moore’s comic. It takes place in Victorian-era England with Allan Quartermain, Dr. Jekyll, Captain Nemo, Tom Sawyer, the Invisible Man, Mina Harker and Dorian Gray.

This movie received horrible reviews and I was expecting a mess. I actually found it to be a lot of fun. There wasn’t as much action as other superhero/comic movies lately but I think that’s why I liked it.

I think what they did with Dr. Jekyll/Mr. Hyde is what they should have done with The Hulk. Instead of making him completely animated, only parts of him were so the graphics were great. I hardly believed Sean Connery could do any of the jumping around, running, and shooting that he was doing but it was all quite silly anyway.

I did enjoy the literary characters all thrown together into one movie. I thought that was a cool concept, but wasn’t sure how it would be pulled off. I thought it was pretty well done.

I’m not sure if I would ever want to watch the movie over and over again, but while I was watching it, I enjoyed it.