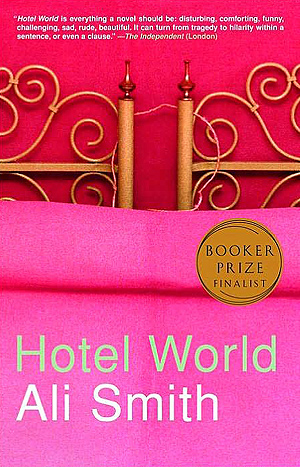 Five women’s lives become interconnected in a hotel somewhere in England. One of the women just happens to be a ghost of a woman who died in the hotel’s dumb waiter. It is written in a stream-of-consciousness style that takes some getting used to, but if you can get past that, you can enjoy it since it is just like you would think if you wrote down your own thoughts.

The book starts off great, with the first chapter featuring the ghost woman. Her memory  was fading quickly along with her senses. She was forgetting what it was like to taste and smell as those senses disappeared. She was trying to remember who she was, how she died and why. It was very interesting and I wish the book would have stuck with her.

The next chapter moves onto a homeless girl sitting outside the hotel everyday. She is barely discussed before moving onto the next woman working at the front counter of the hotel. When the women’s stories started to interconnect, I had hope that the book was going to start coming together in an interesting way.

Then it veered off course with the introduction of the sister of the dead woman. The entire chapter is all one sentence. Page after page of big run-on sentences with ampersands symbols separating the thoughts, but not successfully. It was so hard to follow, and when I could follow it, it wasn’t interesting. I was hoping the last chapter would bring the entire book together, even though I had already lost interest.

Sadly, it did not. It didn’t bring any of the character together, but talked about how people are really connected to one another. Then, why didn’t it show that with the book I had just read?